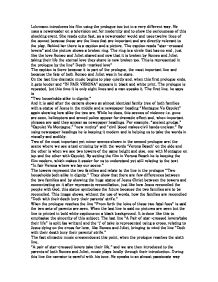 Compare Baz Luhrmann's version of the Shakespeare classic 'Romeo and Juliet' with the original text.

Luhrmann introduces his film using the prologue too but in a very different way. He uses a newsreader on a television set for modernity and to show the seriousness of this shocking event. She reads quite fast, as a newsreader would and uses twelve lines of the sonnet because these are the lines that are important and are directly relevant to the play. Behind her there is a caption and a picture. The caption reads "star-crossed lovers" and the picture shows a broken ring. The ring is a circle that has no end, just like the love Romeo and Juliet shared and now that it is broken by Romeo and Juliet taking their life the eternal love they share is now broken too. This is represented in the prologue by the line" Death-marked love" The caption is there because it is part of the prologue, the most important line and because the fate of both Romeo and Juliet was in he stars. On the last line dramatic music begins to play quietly and, when this first prologue ends, it gets louder and "IN FAIR VERONA" appears in black and white print. The prologue is repeated, but this time it is only eight lines and a man speaks it. The first line, he says is "Two households alike in dignity," And it is said after the camera shows an almost identical family tree of both families with a statue of Jesus in the middle and a newspaper heading "Montague Vs Capulet" again showing how alike the two are. While he does, this scenes of violence i.e. guns are seen, helicopters and armed police appear for dramatic effect and, when important phrases are said they appear as newspaper headings. For example, "ancient grudge," "Capulet Vs Montague," "new mutiny" and "civil blood makes civil hands unclean." By using newspaper headings he is keeping it modern and is helping us to take the words in visually and audibly. ...read more.

This is linked to the car registrations because Luhrmann is trying g to emphasis their likeness. Knowing that the Motagues are feeling intimidated by him, Abra shows his silver teeth with the word 'SIN' on them and shouts to scare them. He gets into the car mocking the reaction he got from the Montagues who are having a discussion. "I will bite my thumb at them, which is a disgrace to them, if they bear it." He bites his thumb at the Capulets in the hope that he wont be seen but at that moment Abra moves his rear view mirror and see him making a mockery of him. He dances around while biting the tip of his thumb and waving his spread out hand and making a mocking noise. This is a well-known modern sign of mockery and is disrespectful, something to which Abra doesn't take kindly. He gets very aggressive and angry; he thumps the steering wheel and accelerates while grinding his teeth to show this. The Montagues get scared and fumble to try and fill the car with petrol. Deciding against this he rolls over the car to shield himself and Abra turns his car to face theirs and he gets out to face them. He asks, almost politely, "Do you bite your thumb at us sir?" Sampson replies, "I do bite my thumb sir," having failed to answer Abra's question he asks it again in a more aggressive tone. While they are shouting across the forecourt, there is a drum roll for background music, which gets louder as their speech continues. As Gregory pointed out that their kinsman was returning Sampson replies, "Yes, better sir." They draw their weapons to fight at this point when Abra says, "Draw if you be men." He says this as if he is daring them to fight him and his kinsmen and he is questioning their manhood. ...read more.

"And Montague," he looks at the Montagues, "Have thrice disturbed the quiet of our streets." The camera goes to the Captain on the last line and again this shows the three parties involved, the authorities, the Capulets and the Montagues. The Captain ends on the line "If ever you disturb our streets again, your lives shall pay the forfeit of the peace." This is a very powerful line because it is a direct threat and can be said with aggression and meaning. The Captain does this but remains calm and his speech is slow and no louder than before. This line shows the severity of the whole situation and the two previous incidents. The fact that the setting is modern and that the Captain is speaking in an old way makes no difference because we are so used to hearing legal representatives speak in this manner, again this shows modernity. I think Luhrmann ends the way he does because the line he uses is so final and it emphasises what he is saying and cannot mistaken for anything else, it is abrupt in comparison to the text yet more dramatic. In my opinion Luhrmann's version of Romeo and Juliet is the better of the two. I think that Luhrmann must be a very intelligent man to be able to use this play and turn it into something different but keeping with the text. I love the way he made it modern and easy to understand. I found Zeffirelli's version slightly boring to watch maybe because it was old but I think that Luhrmann showed what was written a lot better. Zeffirelli was no doubt intelligent but in comparison to Luhrmann he lacks originality and imagination however, it was hard to produce a film like that whenever he directed. The characters in Luhrmann's adaptation were suited to their parts and they really made the film easy to understand. I think it was mainly because of the modernity and sheer imaginative effects and scenery that I liked about his film. ...read more.