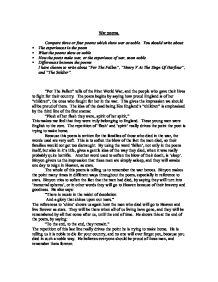 War poems. Compare three or four poems which show war as noble. You should write about: * The experiences in the poem * What the poems show as noble * How the poets make war, or the experience of war, seem noble * Differences between the poems I have chosen to write about "For The Fallen", "Henry V At The Siege Of Harfleur", and "The Soldier". "For The Fallen" tells of the First World War, and the people who gave their lives to fight for their country. The poem begins by saying how proud England is of her "children", the ones who fought for her in the war. This gives the impression we should all be proud of them. The idea of the dead being like England's "children" is emphasised by the third line of the first stanza: "Flesh of her flesh they were, spirit of her spirit," This makes me feel that they were truly belonging to England. These young men were English to the core. The repetition of 'flesh' and 'spirit' really drives the point the poet is trying to make home. Because this poem is written for the families of those who died in the war, the words used are very soft. This is to soften the blow of the fact the men died, so their families would not get too distraught. By using the word 'fallen', not only in the poem itself, but also in it's title, gives a gentle idea of the way they died, when it was really probably quite horrific. ...read more.

"Henry V At The Siege Of Harfleur" was written by William Shakespeare. In all of his plays, Shakespeare saw war as heroic, and that it was wonderful to die for your country. This poem is no exception. It is taken from the play "Henry V", which is based upon the king of England, and is a speech made by King Henry V, before his men went into the battle of Harfleur. Therefore, it is obvious from the start the poem is going to be about how noble it is to fight. King Henry is keen for his men to fight for him to defeat the French. He is therefore going to try to build them up so they feel they need to fight. He begins by calling his army 'dear friends'. This familiarity makes them seem as if they are personal friends of his. He decides to do all he can to make them fight alongside him. It is necessary for him to make them feel war is noble and courageous. He tells them they will all be killed whether they fight for him or not, so it is better to fight and die a noble death, rather than act like a coward. He then says: "In peace there's nothing so becomes a man As modest stillness and humility: But when the blast of war blows in our ears, Then imitate the action of the tiger;" This is telling the men that although it is good for them to be humble in times of peace, when there is a war they need to be string, bold, and ruthless, like a tiger. ...read more.

The first thing that shows this is the way the poem begins: "If I should die," The 'if' is uncertain, and the soldier, who is Brooke, does not know if he is to die or not. As with the other two poems, England is mentioned a lot, giving us the idea of patriotism, and therefore how noble it is to die for your country. The whole poem is about patriotism, of how the young men went to war, and never came back, but left a small piece of them where they fought. Brooke uses the idea that if an Englishman died in a foreign field, it would be like leaving a small piece of England there. This would, in turn, make the field a better place. This shows me he feels England is a superior country. He shows this by using the words 'richer' and 'blest'. It is as if the foreign places have been altered in some way by having a piece of England there. The idea of the dead going back to the earth from which they were created, gives the idea of going back to God, and going to Heaven. This poem uses the personification of England, like "For The Fallen". The poet writes that the men are whom "England bore", or she gave birth to. This shows a great deal of faithfulness to their home country. This poem is written for people who knew the poet, his friends and family. However, it is not written exclusively for them, but for any soldier, as it tells of how they might feel. These three poems show war as noble and patriotic. ...read more.

The title of this piece does state that the poems will be compared; however in the essay this doesn't really happen and instead the poems are analysed in isolation. There are some good points made but further links need to be made between the texts through the elements of language, structure and form.