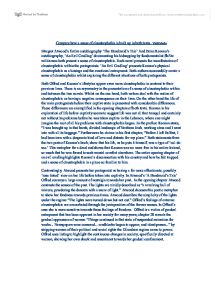 Compare how a sense of claustrophobia is built up in both texts- Vicki Marks Margret Atwood's fictive autobiography 'The Handmaid's Tale' And Brian Keenan's autobiography, 'An Evil Cradling' documenting his kidnapping by fundamentalist Shi'ite militiamen both present a sense of claustrophobia. Each novel presents tional. strophobia Keenan' the manifestation of claustrophobia within the protagonists. 'An Evil Cradling' presents Keenan's physical claustrophobia as a hostage and the emotional entrapment. Both authors successfully create a sense of claustrophobia whilst exploring the different situations of both protagonists. Both Offred and Keenan's lifestyles appear even more claustrophobic in contrast to their previous lives. There is an asymmetry in the presentation of a sense of claustrophobia within and between the two novels. Whilst on the one hand, both writers deal with the notion of claustrophobia as having a negative consequence on their lives. On the other hand the life of the main protagonists before their captive state is presented with considerable differences. These differences are exemplified in the opening chapters of both texts. Keenan in his exploration of life before captivity seems to suggest life was not all that tranquil and certainly not without its problems before he was taken captive in the Lebanon, where one might imagine the root of all his problems with claustrophobia began. In the preface Keenan states, "I was brought up in that harsh, divided landscape of Northern Irish, working class and I went into with all its baggage." ...read more.

" It's almost like June," Offred shifts in mental perspective via association of seasons, Offred's memories of the seasons are superimposed over Gilead's charade of normality, it is as though Offred escapes into her own private narrative underneath her imprisonment as a handmaid her recollections act as freedom from the past. Both Offred and Keenan's sense of claustrophobia is intensified by the way that their human rights are no longer recognised and they have no freedom of choice. Keenan's beard is used in 'The Devil's Barbershop' to symbolise his dignity and freedom of choice. Keenan is very reluctant to have his beard shaved off; his behaviour becomes the manifestation of claustrophobia. He becomes attached to his beard and it symbolises his freedom of expression, "I've had this beard for too long for some halfwit who thinks he owns me to make me what he wants me to be." Throughout this passage Keenan uses long sentences that highlight his heightened emotions, Keenan's aggressive tone towards his captors also shows his reluctance to change, Keenan's identity is displayed through his beard and similarly to Offred he is being made to conform and accept his claustrophobic surroundings. In "The Handmaid's Tale" Offred is defined by her uniform, and looses her previous identity. This expresses that in Gilead their lives have become so claustrophobic that even their ability to express themselves has been repressed. ...read more.

Correspondingly, Offred is able to escape into her private world of memory and desire. Offred uses storytelling as a means of personal survival her narrative is the only way of bridging the gap between an isolated self and the world outside. "It is also a story I am telling, in my head, as I go along." Offred is able to escape the intense feelings of claustrophobia through expressing her feelings. Atwood chooses short sentences to emulate the natural nature of speech resulting in a flowing structure. Fear plays a main role in increasing the sense of physical claustrophobia experienced by both Keenan and Offred. In 'into the bread basket' Keenan uses imagery that creates associations with death "I am being embalmed and mummified" and "I am going back to the coffin." This demonstrates how in such claustrophobic conditions where all his senses have been effectively shut off he is completely helpless and that in these cramped dark conditions the difference between life and death becomes uncertain. Keenan carries on this extended metaphor in the oxymoron "a living corpse" this again reflects the negative experience of being in such claustrophobic conditions. Finally, both authors have used literary and structural techniques to reveal the many ways in which claustrophobia can be created and intensified. Although the two protagonists' situations are very different, as Offred lives a controlled and limited life and Keenan one of absolute entrapment they show many similar traits and emotions triggered from their individual feelings of claustrophobia. ...read more.

This is an excellent essay. It is well structured and includes topic sentences which refer to the question and outline the topic of the paragraph. The essay remains focused on the question and makes perceptive and insightful comments. Well selected quotes are accurately analysed using appropriate technical vocabulary. Intelligent and insightful comments on both books throughout show empathy and engagement with the narrators.