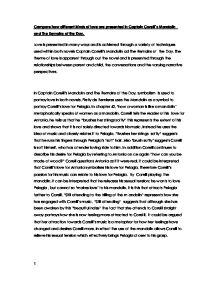 Compare how different kinds of love are presented in Captain Corelli(TM)s Mandolin and The Remains of the Day.

Compare how different kinds of love are presented in Captain Corelli's Mandolin and The Remains of the Day. Love is presented in many ways and is achieved through a variety of techniques used within both novels Captain Corelli's Mandolin ad The Remains of the Day. The theme of love is apparent through out the novel and is presented through the relationships between parent and child, the conversations and the varying narrative perspectives. In Captain Corelli's Mandolin and The Remains of the Day, symbolism is used to portray love in both novels. Firstly de Bernieres uses the Mandolin as a symbol to portray Corelli's love for Pelagia. In chapter 42, 'how a woman is like a mandolin' metaphorically speaks of women as a mandolin. Corelli tells the reader of his love for Antonia, he tells us that he "brushes her strings softly" this represents the extent of his love and shows that it is not solely directed towards his music. Instead he uses the idea of music and closely relates it to Pelagia. "Brushes her strings softly" suggests that he runs his fingers through Pelagia's 'soft' hair. Also 'brush softly' suggests Corelli is soft himself, who has a tender loving side to him. In addition Corelli continues to describe his desire for Pelagia by referring to Antonia once again "how can you be made of wood?" ...read more.

However in the Remains of the Day Stevens admiration for his father's work is more apparent, but genuine parent, child love is not unlike that in Captain Corelli's mandolin. As the Remains of the Day progresses, it could be argued that Stevens is forced to display his love for his father due to the predicament he is placed with. Whilst Stevens' father lays ill in bed, he see's this as an opportunity to finally reveal his feelings. Both father and son are able to engage in a conversation that displays genuine love for one another. "Glad father is feeling much better" portrays Stevens' relief and delight over his fathers "temporary recovery." Although "glad" highlights his happiness, it could be argued that the diction used is mild which does not fully demonstrate his happiness. From this it may reflect how his professional side conflicts with his personal and that it hinders his ability to display mutual love for his father. In addition this could further support the motif "professionalism" that is commonly associated with Stevens throughout the novel. By Stevens' referral to his dad as "father" suggests his inability to fully open up and he is only able to speak correct English, which becomes apparent through out the novel. His use of correct English, ties in with his aspiration to become a "great butler" of "dignity." ...read more.

The fact that it was kept so "carefully" portrays how attached he has become to the waistcoat. In effect it may suggest that he does not want to let go of any feelings for Pelagia, therefore by keeping the waistcoat enables him to keep his feelings for her intact. However towards the end of the novel, there is no resolution in the relationship, in turn ending the novel ambiguously. In contrast The Remains of the day spans over six days and concludes with Miss Kenton and Stevens reminiscing and discussing about missed opportunities. "I've grown to love him displays Miss Kenton's true feeling for her husband, she was not in love at first. Furthermore "I get to thinking about a life I may have had with you" supports the idea of missed opportunity. The fact that she still thinks about a future with Stevens after marriage supports the idea of missed opportunity. It is towards the end of the novel that these feelings are presented to one another, which effectively summarise what they have been trying to say to each other throughout the novel, however in terms of their relationship, the idea of missed opportunity is apparent. Similar to that in Captain Corelli's Mandolin, The Remains of the day ends ambiguously as not much is resolved. In conclusion both de Bernieres and Ishiguro present theme of love through representation of love between parent and child, the conversations between characters and the varying narrative perspectives. ...read more.