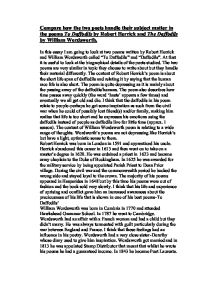 Compare how the two poets handle their subject matter in the poems To Daffodils by Robert Herrick and The Daffodils by William Wordsworth.

Compare how the two poets handle their subject matter in the poems To Daffodils by Robert Herrick and The Daffodils by William Wordsworth. In this essay I am going to look at two poems written by Robert Herrick and William Wordsworth called "To Daffodils" and "Daffodils". At first it is useful to look at the biographical details of the poets studied. The two poems are very similar in topic they choose to write about but they handle their material differently. The content of Robert Herrick's poem is about the short life span of daffodils and relating it by saying that the human race life is also short. The poem is quite depressing as it is mainly about the passing away of the daffodils/humans. The poem also describes how time passes away quickly (the word 'haste' appears a few times) and eventually we all get old and die. I think that the daffodils in his poem relate to people-perhaps he got some inspiration as such from the civil war when he could of possibly lost friend(s) and/or family, making him realise that life is too short and he expresses his emotions using the daffodils instead of people as daffodils live for little time (approx. 1 season). The content of William Wordsworth poem is relating to a wide range of thoughts. Wordworth's poems are not depressing like Herrick's but have a light, optimistic sense to them. ...read more.

Early rising could possibly indicate that the seasons are changing and beginning of a new day. 5-7th lines; "Stay, stay Until the hasting day Has run" This part is saying that he doesn't want the daffodils to go or die until the day is over. Herrick describes the day as going very fast 'hasting day' 8-12th lines; "But to the evensong; And, having pray'd together, we Will go with you along" "We have a short time to stay, as you, We have as short as spring;" Robert Herrick is saying that we (humans) have as short as life as daffodils. And mentions that it is as short as spring in which is the only season when daffodils can survive. 13-15th lines "As quick as growth to meet decay, As you, or anything. We die" Describing that when we get older we will 'meet decay' e.g. Diseases. And then die. 16-20th lines; "As your hours do, and dry Away Like to the summer's rain; Or as the pearls of morning's dew, Ne'er to be found again." Carrying no from before still saying that as we 'dry away' which for humans could mean getting old or for daffodils which could mean the soil around them dries up (in which case the daffodils cannot survive). At the end of the poem he's saying that life is very precious like a 'pearl' delicate but once you have gone you can't return to the life that's just past you. ...read more.

are so cheerful and merry. 19-20th lines "For oft on my couch I lie In vacant or pensive mood," This is a change of scene when the poet is deep in thought. 21-22nd lines "They flash upon that inward eye Which is the bliss of solitude;" 'They' subjects people. 'Inward eye' could mean a vision or describing some kind of meditation. 23-24th lines; "And then my heart with pleasure fills, And dances with the daffodils." 'My heart' which represents head is filling up with joy from thinking about the daffodils and dreams of being with the daffodils, 'dances with the daffodils'. In William Wordsworth's poem he used personification e.g. "The waves beside them danced" and "Tossing their heads in sprightly dance" in which waves do not dance and daffodils do not toss their heads in a sprightly dance. In this poem there is no alliteration in which I can note. "Continuous as the stars that shine" is a type of simile that adds to the effect and imagery. Conclusion I think Robert Herrick's poem was very successful as he shows that time passes quite quickly and describes the preciousness of life. I also think that William Wordsworth poem was also a great success. I think that the poem is open-minded and a happy one to read. My favourite out of the two studied though is Robert Herrick's as you can relate to it and know the feelings that he is expressing throughout the poem. ...read more.