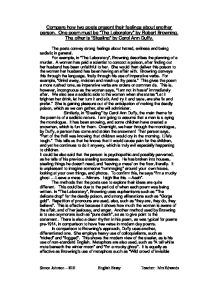 Compare how two poets present their feelings about another person - One poem must be &quot;The Laboratory&quot; by Robert Browning, the other is &quot;Stealing&quot; by Carol Ann Duffy.

Compare how two poets present their feelings about another person. One poem must be "The Laboratory" by Robert Browning. The other is "Stealing" by Carol Ann Duffy. The poets convey strong feelings about hatred, evilness and being s******c in general. For example, in "The Laboratory", Browning describes the planning of a murder. A woman has paid a scientist to concoct a poison, after finding out her husband has been unfaithful to her. She would then deliver this poison to the woman her husband has been having an affair with. Browning conveys this through the language, firstly through his use of imperative verbs. For example, "Grind away, moisten and mash up thy paste." This gives the poem a more rushed tone, as imperative verbs are orders or commands. ...read more.

It could be also said that the person is psychopathic and possibly perverted, as he tells of his previous stealing successes. He has broken into houses, stealing things he doesn't need, and 'leaving a mess' on the floor, literally. It is unpleasant to imagine someone "rummaging" around your own house, looking at your own things, and photos. To confirm this, he says "I'm a mucky ghost ... Leave a mess ... Mirrors. I sigh like this - Aaah". The methods that the poets use to explore their ideas are quite different. This could be due to the period of when each poem was being written. In "The Laboratory", Browning uses euphemisms such as "The delicate drop" for the deadly poison, and strong alliterations such as "Gorge gold". Repetition of pronouns are used, also, such as "they are, they do, they believe". ...read more.

Poems past and present use metaphors, as they help to increase imagery in the reader, and convey the poet's thoughts. Also, the reader can draw their own interpretations of metaphors, as sometimes they could have more than one meaning; being ambiguous. Overall, the poems can be seem to overlap in their theme, and the emotions they help to provoke in the reader, such as hate for a character, and sympathy for a character. However, they differ when we look at the imagery they provoke which Browning uses on frequent occasions when describing the potion or the laboratory's surroundings. Duffy does not use a lot of this. Also, rhythm, which is clearly different, as Duffy uses different methods to convey the poem's effectiveness. The language use also differentiates, there being colloquialisms and informal language to convey the modern carefree attitude as is common today. Simon Johnson - R10 English Essay Teacher: Mrs Edwards ...read more.