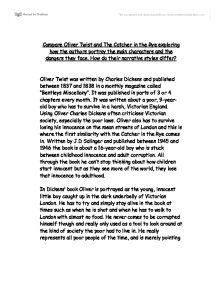 Compare Oliver Twist and The Catcher in the Rye exploring how the authors portray the main characters and the dangers they face. How do their narrative styles differ?

Compare Oliver Twist and The Catcher in the Rye exploring how the authors portray the main characters and the dangers they face. How do their narrative styles differ? Oliver Twist was written by Charles Dickens and published between 1837 and 1838 in a monthly magazine called "Bentleys Miscellany". It was published in parts of 3 or 4 chapters every month. It was written about a poor, 9-year-old boy who has to survive in a harsh, Victorian England. Using Oliver Charles Dickens often criticises Victorian society, especially the poor laws. Oliver also has to survive losing his innocence on the mean streets of London and this is where the first similarity with the Catcher in the Rye comes in. Written by J.D Salinger and published between 1945 and 1946 the book is about a 16-year-old boy who is stuck between childhood innocence and adult corruption. All through the book he can't stop thinking about how children start innocent but as they see more of the world, they lose that innocence to adulthood. ...read more.

He is constantly thinking for himself and doing his own thing and rarely does another lead him. Holden, like Oliver has to travel into the mean city streets where he encounters threats to his moral and psychological survival. He, like Oliver, is in danger only that this time it is more from his own mind rather than thieves and villains. Holden often thinks about his brother Allie who died when Holden was young. He also sometimes pretends Allie was there with him and talks to him. He also has a young sister, Phoebe, who is very intelligent and wants to grow up fast. For Holden, both these characters represent childhood innocence. In page 190 of the book Holden says "I felt so damn happy all of a sudden, the way old Phoebe kept going around and around. I was damn near bawling I was felt damn happy, if you want to know the truth. ...read more.

This means that the reader gets lots of opinions and thoughts that are in the mind of the main character. But it does also mean that you only get one persons perspective on the ideas in the book. This however does sometimes hold his part together. By repeating ideas like sex, family, Allie and the ducks the author keeps the reader interested by making them want to find out what is going on in Holdens mind and whether he will survive his own confused depression. Again like in Oliver Twist the author is criticising aspects of society including the class system, wealth, snobbery and most of all the way people put on a face to look good in other peoples minds. Both novels criticise society. Oliver Twist criticises more physical aspects like the way poor people were treated. The Catcher in the Rye criticises moral things, however both novels use innocence to explore these ideas. Both authors have managed to show these ideas well, as both books have been massively successful. They also quite clearly point out their issues by repeatedly covering them in different situations. ...read more.