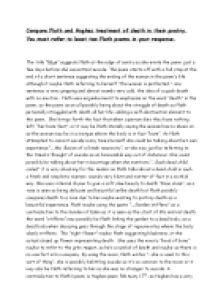 Compare Plath and Hughes treatment of death in their poetry. You must refer to least two Plath poems in your response.

﻿Compare Plath and Hughes treatment of death in their poetry. You must refer to least two Plath poems in your response. The title ?Edge? suggests Plath at the edge of sanity as she wrote the poem just a few days before she committed suicide. The poem starts off with a full stop at the end of a short sentence suggesting the ending of the woman in the poem?s life although it maybe Plath referring to herself ?The woman is perfected.?, one sentence is very gripping and almost sounds very cold, the idea of a quick death with no emotion. Plath uses enjamberment to emphasise on the word ?death? in the poem, as the poem as an all possibly being about the struggle of death as Plath personally struggled with death all her life, adding a self-destruction element to the poem. She brings forth the fact that when a person dies they have nothing left, ?her bare feet?, or it may be Plath literally saying the woman has no shoes on as the woman may be in a morgue where the body is in fact ?bare?. As Plath attempted to commit suicide many times herself she could be talking about her own experience?....the illusion of a Greek necessity?, or she may just be referring to the Greek?s thought of suicide as an honourable way out of dishonour. ...read more.

on the day, ?...I kneeled..., I roped..., I forced..?, and the reader soon realises how natural death was to him as he named the poem February 17th as if it was like any other day to him. Plath?s second poem ?Death and Co.? portrays death in a much more negative way than her poem ?Edge?. The title ?Death and Co.? is possibly linking to death being a business and also personifying death, Plath is possibly trying to portray that death is not on its own. Plath suggests there are ?two? death figures. Emphasis as there is the repetition of two, ?...of course there are two?, form suggests that it?s obvious and everyone should already know that there is two deaths, as ?course? sounds very conversational. Plath is used to death, ?.....perfectly natural now?, she is used to death as she had many close encounters with it due to her many suicide attempts. Plath brings on a negative feel to death, ?The one who never looks up? as if death has done something wrong as it can?t look anyone in the eye, ?...whose eyes are lidded?, Plath doesn?t look into death?s eyes yet as her time hasn?t come yet, and so death is hidden from her. Plath adds pain, ?...scald scar?, as the ?sc? sounds are quite blunt and quick, it?s a very sharp way of describing death. ...read more.

Plath suggests the idea of rigourmortus although it?s ironic as she?s still alive ?I do not stir?, or it may be Plath suggesting that she?s dead on the inside, and that her emotions may have gone stiff. In contrast to Plath?s poem ?Death and Co.?, Hughes poem ?Examination at the Womb-Door? emphasises on death owning existence as even as soon as you are born you face death but death still being inferior to God, as the examiner being God the questions throughout the poem are very authoritive, suggesting that Hughes may think that God has authority over death. The title could possibly be Hughes signifying the point of crossing into the physical world. It seems as if sees death as the starting point: Man has been living, just to get experience to pass an exam before God, also giving a very ominous feel to death, the ultimate fear of all mankind and a sacrilegious tone to the poem. It maybe that Hughes sees the soul as immortal as when the crow is asked ?But who is stronger than death?? the crow replies ? Me, evidently? as the crow is immortal due to the rebirth cycle, so despite the body?s death, the soul remains, therefore the crow is in fact stronger than death. Hughes uses negative adjectives and pronouns throughout the poem possibly to remark the deficiency of the human body against death. ...read more.