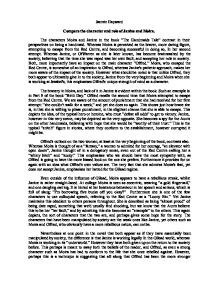 Compare the character and role of Janine and Moira in &quot;The Handmaid's Tale&quot;

Jasmin Hayward Compare the character and role of Janine and Moira. The characters Moira and Janine in the book "The Handmaids Tale" contrast in their perspectives on being a handmaid. Whereas Moira is perceived as the braver, more daring figure, attempting to escape from the Red Centre, and becoming successful in doing so, In her second attempt. Whereas Janine, or OfWarren as she is later known, has become brainwashed by the society, believing that the time she was raped was her own fault, and accepting her role in society. Both, more importantly have an impact on the main character "Offred." Moira, who escaped the Red Centre, is somewhat of an inspiration to Offred, whereas Janine's pathetic approach, makes her more aware of the impact of the society. However what should be noted is that unlike Offred, they both appear to ultimately give in to the society, Janine from the very beginning and Moira when she is working at Jezabel's, this emphasises Offred's unique strength of mind as a character. ...read more.

Whereas Moira is thought of as a "fantasy," a woman to admired for her courage, "an elevator with open doors", Janine thought of in a derogatory sense, even out of the Red Centre calling her a "whiny b***h" and "sucky." This emphasises who we should have the most sympathy with, as Offred is going to have the more biased look on the one she prefers. Furthermore it provides for us again with an idea what Offred's own values are. The very fact that she admires Moira's feat, yet does not accept Janine, emphasises her hatred for the Gilead regime. Even outside of the influence of Gilead, Moira appears to have a rebellious streak, whilst Janine is rather straight-laced. At college Moira is seen as eccentric, wearing "a gold fingernail," and one dangling earring. It is hinted at her boisterous behaviour in her speech and actions, which is full of slang: "I'm borrowing five bucks off you okay?" Furthermore she is one of the few characters to use colloquial speech, referring to the Red Centre as a "Loony Bin." ...read more.

However, perhaps this is a technique is suggesting that all along that Offred has been the more stronger character that the instinctive Moira, and that in truth Moira is no different that the "whiny b***h" Janine. I would argue therefore that Moira and Janine not only emphasise each others character, but they role of Offred. They serve as a contrast to each other, showing the difference between the handmaids in the book. As Janine believes in the situation, but Moira doesn't, this provides hope that the beliefs of the generation before still exist, and that not everyone can be brainwashed. In addition they both provide inspiration to Offred, they show her what she wants to be, and what she doesn't. She doesnt want to conform to the ways of the weak Janine, which she should in this society, and is more persuaded by the braver actions of Moira. Furthermore, however they Moira's rebelliousness emphasises that Janine is weak, and Janine's weakness that Moira is rebelliousness. However I would argue that the biggest point for these characters is to show the show the true bravery of Offred, as she, unlike them both, never agrees with the regime of Gilead. ...read more.