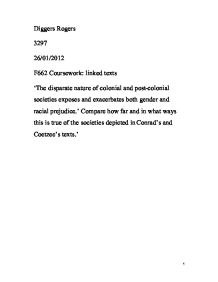 Compare the disparate nature of colonial and post colonial societies in &quot;Heart of Darkness&quot; and Coetzee's &quot;Disgrace&quot;.

Diggers Rogers 3297 26/01/2012 F662 Coursework: linked texts 'The disparate nature of colonial and post-colonial societies exposes and exacerbates both gender and racial prejudice.' Compare how far and in what ways this is true of the societies depicted in Conrad's and Coetzee's texts.' The two books were written almost 100 years apart, with JM Coetzee's award winning Disgrace at the end of the 20th century in 1999 and Joseph Conrad's Heart of Darkness in 1902. Despite this temporal difference, they both clearly highlight the disparate nature of colonial and post colonial societies. Indeed a similar level of racial and gender related prejudice is apparent; and they are both equally prevalent and equally interlinked. It will be demonstrated that Heart of Darkness and Disgrace share a remarkably similar overriding message: discrimination in early 20th century Belgian Congo and late 20th century, post-apartheid South Africa are hotbeds of prejudice. However, in order to demonstrate this prejudice both authors employ contrasting techniques, in terms of form and structure and narrative method. With Conrad, he unsurprisingly uses the typically modernist device of an unreliable narrator. Charlie Marlow, who epitomises the views and beliefs of a white middle-aged European, involved in imperial activities, is shown to be deeply unreliable in terms of ...read more.

'You don't understand....because you can't.' (157) in Disgrace the epistemological distance between the genders, apparent throughout the text, is here exemplified. 'Maybe, for men, hating the women makes s*x more exciting...'(158) Lurie has a very misogynistic approach towards women and here is an example of Lucy attacking it. 'Women are adaptable.'(210) This IS showing that Lurie has not always treated women as such. Van Der Vlies says that 'the novel is concerned with gendered identity, s****l behaviour and exploitation from the very first page.' This shows that throughout the novel, women in general receive prejudice from men and are clearly not treated as equals and they are to be used purely by men for s****l favours; 'a women's beauty.. She has a duty to share it'.(16) Lucy Graham-says that 'Disgrace points to a text where women are regarded as property, and are liable for protection only insofar as they belong to men, as a lesbian, Lucy would be regarded as 'unowned' and therefore 'huntable'...' In heart of darkness the female characters are presented in a demoralising way and there is a huge disparity in s*x making the women seem as to being weak. ...read more.

Marlow states 'they still belonged to the beginning of time'. This quote is saying that the non-white community is underdeveloped and in need of civilizing i.e. saying that the non-whites are below the whites in social hierarchy. Helene Cixous says 'thought has always worked through opposition...through dual hierarchal positions.' As well as in heart of darkness, there are a lot of colonial references within disgrace. A transition between apartheid and post apartheid he is at the forefront of events in Disgrace, on the one hand David Lurie encompasses the white male views of the apartheid system. Hence he is termed an 'outsider' (141) and an 'alien' (191) in contrast his daughter Lucy is deemed to be 'forward looking' (136, 208, 210) as she symbolises the new multi-racial society of post-apartheid South Africa. The violent struggle between the old society and the new is suggested in the following descriptions; 'booty; war reparations' (191) and 'imposter' (194). Lurie also refers to his kind as being 'we westerners' (202). Van Der Vlies highlights the discrepancy between the old and the new South Africa when he argues that; 'Lurie regards western-specifically European- models of culture and behaviour as preeminent markers of civility: his familiarity with 'western' literature, philosophy, music, art, dance and drama attests overwhelmingly to this. ...read more.