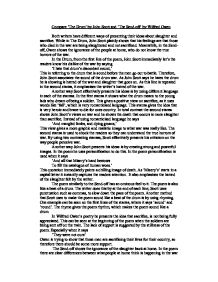 Compare 'The Drum' by John Scott and 'The Send-off' by Wilfred Owen Both writers have different ways of presenting their ideas about slaughter and sacrifice. While in The Drum, John Scott plainly shows that his feelings are that those who died in the war are being slaughtered and not sacrificed. Meanwhile, in the Send-off, Owen shows the ignorance of the people at home, who do not know the true horrors of the war. In the Drum, from the first line of the poem, John Scott immediately let's the readers know his dislike of the war by saying 'I hate that drum's discordant sound,' This is referring to the drum that is sound before the men go out to battle. Therefore, John Scott associates the sound of the drum war. As John Scott says he hates the drum he is showing is hatred of the war and slaughter that goes on. As this line is repeated in the second stanza, it emphasises the writer's hatred of the war. Another way Scott effectively presents his ideas is by using different language in each of the stanzas. ...read more.

In Wilfred Owen's poetry he presents the idea that sacrifice, is not being fully appreciated. This can be seen at the beginning of the poem when the soldiers are being sent off on the train. The lack of support is suggested by the stillness of the poem. Especially when it says 'They were not ours' Owen is trying to show that these men are sacrificing their lives for their country, so therefore there should be some more support. The Send-off shows the ignorance of the slaughter back at home. In the poem there are clear differences between what people at home think is happening in the war and the actual realities that the soldiers face at the frontline. This can be seen by the idea of the flowers. 'Their breasts were stuck all white with wreath and spray.' The flowers here are supposed to be for celebration, however the colour suggests something else entirely. The fact that the wreath is white gives the impression of a funeral. This is showing that Owen's view is that once the soldiers are sent off there is a slim chance of them ever returning. ...read more.

These two lines, clearly present Scott's view on the destruction and damage, the war causes. As the poem is written in rhyming couplets it effectively shows the writers message. The structure and content of the poem is simple, which helps enforce the message. However, on the other hand, I believe, Owen's message is far more chilling. Even though Owen's message is not stated, the readers have a clear view on Owen's view of the war. The mere mention of 'siding-shed' immediately gives the readers the image of slaughterhouses. So the readers are prepared for the soldier's fate. Scott's aim is for the readers to know his hatred of the war, while Owen wants the readers to know the truth about the war. Owen seems to want the poem to shock the reader, which is why I think the short lines, that stand out are so haunting. An example of this is 'In wild train-loads?' The question mark really drives home about how many soldiers are not returning, because of the sacrifice they have to make. Also as Owen criticises people at home's view on the war, it gets the readers thinking about how they too perceive the war. Therefore, I feel that Owen's message is more effective than Scott's. ...read more.

This essay is set out as comparative essay but instead the analysis covers each poem in almost full isolation. There are some good points made but further links need to be made between the poems to show an understanding of the similarities and differences in the texts.