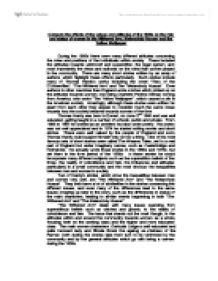 Compare the effects of the values and attitudes of the 1800s on the role and status of women in the Withered Arm, Melancholy Hussar and the Yellow Wallpaper.

Compare the effects of the values and attitudes of the 1800s on the role and status of women in the Withered Arm, Melancholy Hussar and the Yellow Wallpaper During the 1800s there were many different attitudes concerning the roles and positions of the individuals within society. These included the attitudes towards witchcraft and superstition, the legal system, and most importantly the views and outlooks on the roles that women played in the community. There are many short stories written by an array of authors, which highlight these effects particularly. Such stories include many of Thomas Hardy's works including the novel "Tess of the D'Urbervilles", "The Withered Arm" and The "Melancholy Hussar". Even authors in other countries than England wrote stories which picked up on the attitudes towards women, one being Charlotte Perkins Gilman coming from America, who wrote "The Yellow Wallpaper", which caused a stir in the American society. Amazingly, although these stories were written far apart from each other they appear to consider much the same views towards how the society behaved towards women of the time. Thomas Hardy was born in Dorset, on June 2nd 1840 and was well educated, getting taught in a number of schools, public and private. From 1862 to 1867 he worked as an architect but also wrote poetry. ...read more.

In his opinion they are only there to make the prosperous men look more wealthy and well off, and after they have been married to they are entirely the men's property, doing only what the man says to do. The society of that day and age also help to make the women seem worthless. The society looks upon the women as accessories to the men and an unequal status marriage is not allowed. This may excuse Farmer Lodge to a certain extent as he was only treating women how the community felt they should be treated and if he went against that he may seem weak and therefore have a lower status. Another of Thomas Hardy's stories which show many of the same views is "The Melancholy Hussar". Set in a small isolated village on the side of an army camp the story portrays the roles and views towards women in a very similar light to the "The Withered Arm". The main characters in this short story include Phyllis, a secluded and "so shy that if she met a stranger...she felt ashamed at his gaze" woman who is completely governed by her father Dr Grove. Dr Grove, the father of Phyllis, "a professional man" who has "a taste for lonely meditation", Mr. Humphrey Gould, a bachelor who has family in high positions but himself is "poor as a crow" without people knowing, and finally Matth�us Tina, a York Hussar who possesses "chronic homesickness". ...read more.

During the story the husband of the author is trying to cure her of a mental depression. He takes up the famous rest cure, and sends his wife to solitary confinement in "the nursery at the top of the house", but on closer examination this room looks more like a cell with bars across the windows, a large nailed down bed, scratched floorboards and a shredded wallpaper which covers the walls. Although the author persists to her husband to "let us go downstairs" as she does not like the room, he will not let her as he always believes that he knows best and that a woman cannot tell her what he should do, especially when she has a mental illness. By the end of the story because of the mans total disregard of the woman's views the woman escapes the chains of the man, but at the same time, because of continuously being forced to stay in the room has also turned mad with her condition. Overall the attitudes and values of the women of the 1800s were much the same for the higher class, and the lower class. Even across the Atlantic Ocean the view seem to be similar in many ways. It is hard to blame individuals to the tragic events happening to the women at the end of each story, as they were in all cases influenced greatly by the society of that day and age. ...read more.