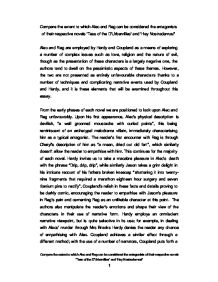 Compare the extent to which Alec and Reg can be considered the antagonists of their respective novels Tess of the DUrbervilles and Hey Nostradamus!

Compare the extent to which Alec and Reg can be considered the antagonists of their respective novels 'Tess of the D'Urbervilles' and 'Hey Nostradamus!' Alec and Reg are employed by Hardy and Coupland as a means of exploring a number of complex issues such as love, religion and the nature of evil, though as the presentation of these characters is a largely negative one, the authors tend to dwell on the pessimistic aspects of these themes. However, the two are not presented as entirely unfavourable characters thanks to a number of techniques and complicating narrative events used by Coupland and Hardy, and it is these elements that will be examined throughout this essay. From the early phases of each novel we are positioned to look upon Alec and Reg unfavourably. Upon his first appearance, Alec's physical description is devilish, "a well groomed moustache with curled points", this being reminiscent of an archetypal melodrama villain, immediately characterising him as a typical antagonist. The reader's first encounter with Reg is through Cheryl's description of him as "a mean, dried out old fart", which similarly doesn't allow the reader to empathise with him. This continues for the majority of each novel. Hardy invites us to take a macabre pleasure in Alec's death with the phrase "Drip, drip, drip", while similarly Jason takes a grim delight in his intricate recount of his fathers broken kneecap "shattering it into twenty-nine fragments that required a marathon eighteen hour surgery and seven titanium ...read more.

The 'Gun Boys' on the other hand are presented as monstrous, given their disregard for human life, "There, see? Killing is fun", Coupland not allowing us to empathise with them at all by supplying them with no back story, nor lamenting on alienation or any other motivation that drove them to carry out the massacre. The exception to this is Jeremy. In declaring "I repent for my sins", there is a degree of remorse which humanises the killer somewhat, though this can be seen as too little too late, this being particularly evident in Jason's assessment of Jeremy, "he repented and so he was forgiven and lionised", the italicised "repented" implying a mocking intonation, undermining any sense of heroism. Ultimately, as these characters make such brief appearances in their respective novels, they remain quite under developed, making it difficult to apply the label of antagonist to them. Instead, these characters can be looked upon as catalysts; it is the reactionary roles to these early narrative events that characters like Alec and Reg take that pushes the story onward, at least initially, but following this they then go on to initiate actions of their own, their responses serving to further complicate the narrative. In terms of religion, Alec and Reg have many similarities, such as their tendency to use faith as a crutch or a shield to hide their own inadequacies. ...read more.

Alec and Reg can certainly be looked upon as antagonistic, complicating forces, their actions - be it Reg's harsh response to Jason's killing of Mitchell, the 'gun boy' or Alec's r**e of Tess - serving to create tragedy, and in doing so push the narrative onwards. Despite this, neither character can be looked upon as an outright villain due to moments where they are allowed to display more sympathetic qualities. Of the two, I feel that Reg can be seen as the lesser evil as he is given greater opportunity to speak for himself towards the novels' end which goes some way to challenge the idea of the character being a complete villain. On the other hand there is Alec; while he finds some redemption in his Christian values and the appearance that by later phases of the novel he is a changed man, Hardy denies the reader to empathise with the character in any meaningful way by ultimately punishing him, through Tess' murder of him. But despite this, it is not possible to look at either character as simply an antagonist thanks to the more complex characterisation applied to them by Hardy and Coupland. Word Count: 2408 ?? ?? ?? ?? Compare the extent to which Alec and Reg can be considered the antagonists of their respective novels 'Tess of the D'Urbervilles' and 'Hey Nostradamus!' 1 ...read more.