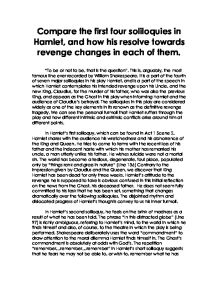 Compare the first four soliloquies in Hamlet, and how his attitude changes towards revenge in each of them

Compare the first four soliloquies in Hamlet, and how his resolve towards revenge changes in each of them. "To be or not to be, that is the question". This is, arguably, the most famous line ever recorded by William Shakespeare. It is a part of the fourth of seven major soliloquies in his play Hamlet, and is a part of the speech in which Hamlet contemplates his intended revenge upon his Uncle, and the new King, Claudius, for the murder of his father, who was also the previous King, and appears as the Ghost in this play when informing Hamlet and the audience of Claudius's betrayal. The soliloquies in this play are considered widely as one of the key elements in its renown as the definitive revenge tragedy. We can see the personal turmoil that Hamlet suffers through the play and how different intrinsic and extrinsic conflicts arise around him at different points. In Hamlet's first soliloquy, which can be found in Act 1 Scene 2, Hamlet shares with the audience his wretchedness and his abhorrence of the King and Queen. ...read more.

As in the previous soliloquy, here too he seems unsure of how to complete his task. Shakespeare draws Hamlet into examining his present state of mind in what is, although technically being the third soliloquy, the second major one. Impressed by the simulated passion of the Actor in the 'Hecuba' speech, Hamlet feels inadequate and ashamed of his delay in avenging his father's death. In the second half of the speech. Hamlet expresses for the first time his doubts about the Ghost's honesty and intentions: "The spirit that I have seen may be the devil", sent "to damn me [Hamlet]." (Line 551). He resolves to test the truth of the Ghost's story by having the actor perform a play which closely re-presents the Ghost's account of his murder. Guilty people watching plays have been shocked into confessing their crimes. Hamlet hopes the play will give some proof that the Ghost was telling the truth and that it will provoke Claudius into revealing his guilt: "The play's the thing wherein I'll catch the conscience of the King." ...read more.

In this soliloquy, Hamlet seems to have forgotten that his dead father visited him not long ago, saying "The undiscovered country from whose bourn No traveller returns" (Line 79). This soliloquy is very unlike the others Shakespeare gives Hamlet. There is a dejected uniformity of tone and tempo, none of the passionate agitation associated with someone wrestling with complex and confused feelings, much unlike the previous soliloquies, so this serves as a powerful dramatic contrast to the other passionate occurrences in the play. It appears from this soliloquy that, to some extent, Hamlet has resigned himself to the fate that the Ghost set out for him in Act 1, and intends to take action presently. In conclusion, I think it is possible to see when comparing the first four soliloquies in Hamlet by William Shakespeare, that chronologically there is an obvious development. Over the period of time that passes between each soliloquy, you can see to some extent Hamlet's gradual acceptance of his fate. The language Hamlet uses, when combined with other factors employed by Shakespeare to such effect, seems to become gradually more complicated and fluent, indicating his evolving resolve towards revenge. ...read more.