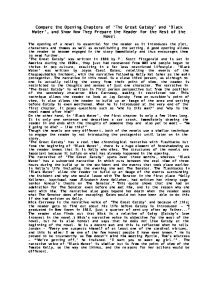 Compare the Opening Chapters of The Great Gatsby and Black Water, and Show How They Prepare the Reader for the Rest of the Novel

Compare the Opening Chapters of 'The Great Gatsby' and 'Black Water', and Show How They Prepare the Reader for the Rest of the Novel The opening of a novel is essential for the reader as it introduces the plot, characters and themes as well as establishing the setting. A good opening allows the reader to become engaged in the story immediately and thus encourages them to read further. 'The Great Gatsby' was written in 1926 by F. Scott Fitzgerald and is set in America during the 1920s, they just had recovered from WWI and people began to thrive in pop culture, resulting in a far less restricted lifestyle. 'Black Water' was written by Joyce Carol Oates, retelling the events of the Chappaquiddick incident, with the narrative following Kelly Kelleher as the main protagonist. The narrative in this novel is a close third person, as although no one is actually telling the story from their point of view, the reader is restricted to the thoughts and senses of just one character. The narrative in 'The Great Gatsby' is written in first person perspective but from the position of the secondary character Nick Carraway, making it restricted too. This technique allows the reader to look at Jay Gatsby from an outsider's point of view, it also allows the reader to build up an image of the area and setting before Gatsby is even mentioned. ...read more.

In the opening of 'The Great Gatsby' the reader is not given any information on who Gatsby is, and why he is so 'great', as the title of the novel would suggest. Nick does not like him at first though he does change his view of him over time, the reader, along with Nick, discover that he is in fact a very amicable man that has been working hard all his life. He is in love with Daisy and his lavish parties are all in the hope that she will attend and give him a chance to win her heart. There is much mystery surrounding Gatsby's fortune, and though part of it is due to bootlegging, the reader discovers that Gatsby is actually honourable and he dies because of Daisy's accidental killing of Myrtle - "After Gatsby's death the East was haunted for me like that." In 'Black Water', Kelly's opinion of The Senator also changes from the beginning of the novel, at first she idolises him but as the novel progresses she realises just how unsettling his presence actually is, but by then it is too late. Tom Buchanan is the antithesis of Nick and Gatsby, he is Gatsby's love rival for Daisy and he 'wins' her not once, but twice. ...read more.

The opening of 'The Great Gatsby' points the reader forward by having moments which at the time seem unrelated but are important for later, this can be demonstrated by Myrtle's phone call to Tom, she would have been a minor character but her death results in Gatsby's death so she is introduced early on in the novel to illustrate her necessity. In 'Black Water', the opening is used in a slightly different way to point the reader forward, the unusual narrative timeline in which it switches between past and present may seem confusing, but it is representative of the disorientating feeling of drowning, the novel continues on in this way and as it progresses, the reader comes to realise that it is in fact an excellent narrative device. To conclude it could be said that the role of an opening is ultimately to encourage the reader forward by mentioning and introducing characters that the reader will meet and get to know later. The settings and themes mentioned in an opening will often play an important part in the novel and as the plot progresses the reader may find events from earlier on in a novel will have played a part or engaged the reader to reach the pinnacle of the novel, this is true of both 'The Great Gatsby' and 'Black Water'. ...read more.