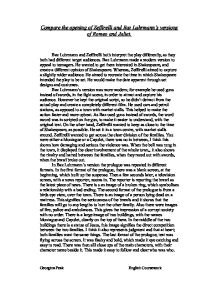 Compare the opening of Zeffirelli and Baz Luhrman

Compare the opening of Zeffirelli and Baz Luhrmann's versions of Romeo and Juliet. Baz Luhrmann and Zeffirelli both interpret the play differently, as they both had different target audiences. Baz Luhrmann made a modern version to appeal to teenagers. He wanted to get them interested in Shakespeare, and create a different opinion of Shakespeare. Whereas, Zeffirelli aimed to capture a slightly wider audience. He aimed to recreate the time in which Shakespeare intended the play to be set. He would make the date apparent through set designs and costumes. Baz Luhrmann's version was more modern; for example he used guns instead of swords, in the fight scene, in order to attract and capture his audience. However he kept the original script, so he didn't detract from the actual play and create a completely different film. He used cars and petrol stations, as apposed to a town with market stalls. This helped to make the action faster and more upbeat. As Baz used guns instead of swords, the word sword was in scripted on the gun, to make it easier to understand, with the original text. ...read more.

I think it also represents judgment and that at heart; both families want the same things. The last format of the prologue, text was flying across the screen. It was flashy and bold, which made it eye catching and easy to read. There was then sill close ups of the main characters, with their character name beside it. This made it easy to follow and clear who was who. Baz Luhrmann used bright colours for costumes and lively, fast, exciting music, which helped get the audiences' attention. Whereas Baz Luhrmann has used loud, fast music, Zeffirelli has used the complete opposite. In Zeffirelli's prologue he has used calm, peaceful music and he has used woodwind instruments, to create renaissance- style music. There is a voice over speaking the prologue. Like Baz Luhrmann, Zeffirelli has used bright colours. There is an opening image of the market, which sets the scene. It gives the impression of a town caught up in and gripped by hatred and rivalry. There is an angle shot of a Capulet's legs and their costumes, this straight away emphasises the period. ...read more.

It was exciting and upbeat, in order to attract and grip his teenage audience. I think it gets teenagers to rethink their impressions about Shakespeare and start to understand more about his plays. However I think it differs from what Shakespeare intended and possibly relates a different message about Shakespeare (which may be a good thing however, it makes him seem like something he is not and Baz Luhrmann can't make a new and more exciting version of all Shakespeare's plays!) I think Zeffireli was very successful in recreating the period of Shakespeare, and he portrayed the divide within the town very well. However I think that maybe Zeffirelli's version was a little too laid back and 'soft', as I think that Shakespeare would have intended a little more violence and a stronger sense of hatred between the two families, also I think Zeffirelli didn't really show the competition and enjoyment that the young rivals got from winding each other up and starting brawls, too well. However, I do think that both Baz Luhrmann and Zeffireli were successful in capturing the target audience, in the first scenes, and directing their adaptations of Romeo and Juliet. ?? ?? ?? ?? Georgina Peak English Coursework ...read more.