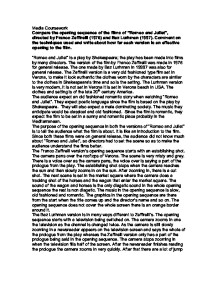 Compare the opening sequence of the films of &quot;Romeo and Juliet&quot;, directed by Franco Zeffirelli (1976) and Baz Lurhman (1997). Comment on the techniques used and write about how far each version is an effective opening to the film.

Media Coursework Compare the opening sequence of the films of "Romeo and Juliet", directed by Franco Zeffirelli (1976) and Baz Lurhman (1997). Comment on the techniques used and write about how far each version is an effective opening to the film. "Romeo and Juliet" is a play by Shakespeare; the play has been made into films by many directors. The version of the film by Franco Zeffirelli was made in 1976 for general release. The one made by Baz Lurhman in 19997 was also for general release. The Zeffirelli version is a very old fashioned type film set in Verona, to make it look authentic the clothes worn by the characters are similar to the clothes in Shakespeare's time and so is the setting. The Lurhman version is very modern, it is not set in Verona it is set in Verona beach in USA. The clothes and setting is of the late 20th century America. The audience expect an old fashioned romantic story when watching "Romeo and Juliet". ...read more.