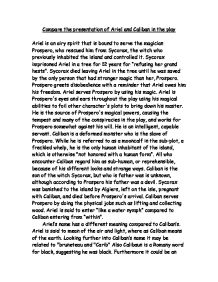 Compare the presentation of Ariel and Caliban in the play

Compare the presentation of Ariel and Caliban in the play Ariel is an airy spirit that is bound to serve the magician Prospero, who rescued him from Sycorax, the witch who previously inhabited the island and controlled it. Sycorax imprisoned Ariel in a tree for 12 years for "refusing her grand hests". Sycorax died leaving Ariel in the tree until he was saved by the only person that had stronger magic than her, Prospero. Prospero greets disobedience with a reminder that Ariel owes him his freedom. Ariel serves Prospero by using his magic. Ariel is Prospero's eyes and ears throughout the play using his magical abilities to foil other character's plots to bring down his master. He is the source of Prospero's magical powers, causing the tempest and many of the conspiracies in the play, and works for Prospero somewhat against his will. He is an intelligent, capable servant. Caliban is a deformed monster who is the slave of Prospero. While he is referred to as a mooncalf in the sub-plot, a freckled whelp, he is the only human inhabitant of the island, which is otherwise "not honored with a human form". All who encounter Caliban regard him as sub-human, or reprehensible, because of his different looks and strange ways. ...read more.

However Caliban did at first love Prospero, until he got him drunk off; "water with berries in't" and had him tell of the entire island and then make him a slave. Prospero uses his power over Caliban in a malicious, vengeful manner. Prospero has a lot more dignity and respect for Ariel than Caliban, this shows from what Prospero says to Ariel; "thou hast done well, fine Ariel!" compared to what he says to Caliban; "poisonous slave". Ariel is loyal to his; "noble master" and is willing to serve him on any occasion; "say what, what shall I do?" compared to Caliban who wouldn't do anything for Prospero if wasn't controlled by him. There use of language is very different indeed. At the start of the play we learn that Caliban was taught English by Miranda; "took pain to make thee speak taught thee each hour" because when Prospero made him his slave he would speak his own language; "know thine own meaning, but wouldst gabble like a thing most brutish" which we know now as Italian. But after being taught this Caliban communicates almost entirely by means of vulgar curses and complaints; "I know how to curse. ...read more.

As for Caliban who knows, will he stay on the island? Will he be taken to Milan to carry on being a slave for Prospero? Will he be given freedom? We are unsure what will happen to him, but I am sure he won't be freed after his plot with Trinculo and Stephano to kill his powerful master. Ariel shows more intelligence in the play than Caliban. Caliban shows trust to easy and is used. Caliban was used by Prospero, so that Prospero could find out all about the island and then take control of it; "I loved thee, and showed thee all the qualities o' th' isle". All Prospero had to do was give him; "water with berries in't" and he got everything he needed to know out of him and then made him a slave. Caliban shows his lack of intelligence later on in the play when he trusts Trinculo and Stephano and falls into the trap of being given wine again; "drink servant-monster when I bid thee". Ariel is very different to Caliban and is cautious of people. Ariel is happy to do things on his own rather than relying on others and if he wasn't in a debt with Prospero he wouldn't be controlled by anyone else. ...read more.