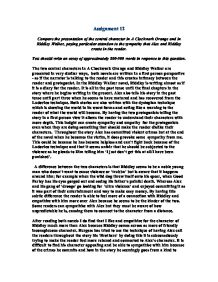 Compare the presentation of the central character in A Clockwork Orange and in Riddley Walker, paying particular attention to the sympathy that Alex and Riddley create in the reader.

Assignment 12 Compare the presentation of the central character in A Clockwork Orange and in Riddley Walker, paying particular attention to the sympathy that Alex and Riddley create in the reader. You should write an essay of approximately 800-900 words in response to this question. The two central characters in A Clockwork Orange and Riddley Walker are presented in very similar ways, both novels are written in a first person perspective - as if the narrator is talking to the reader and this creates intimacy between the reader and protagonist. In the Riddley Walker novel, Riddley is writing almost as if it is a diary for the reader. It is all in the past tense until the final chapters in the story where he begins writing in the present. Alex also tells his story in the past tense until part three when he seems to have matured and has recovered from the Ludovico technique. Both stories are also written with the dystopian technique which is showing the world in its worst forms and acting like a warning to the reader of what the world will become. ...read more.

After reading both novels I do find that I like and empathize for the character of Riddley much more than Alex because Riddley comes across as more of friendly inconspicuous character. Burgess has tried to use the technique of having Alex call the readers throughout the story his 'Brothers' by doing this it is subconsciously trying to make the reader feel more relaxed and connected to Alex's character. It is difficult to find his character appealing and be able to sympathise with him because of the crimes he commits and how in the story he seemingly goes from a kind to nasty person very quickly. Sometimes it almost seems out of character because as he commits the crimes he refers to himself as 'Your Humble Narrator' which of course humble he is not and by referring to himself in that way with the capital letter on each word shows his arrogance which is not attractive for the reader. He also only volunteers to go ahead with the Ludovicco technique because he would get out of prison quicker - not because he would be a better person after doing it. ...read more.

By Alex changing for the good the reader can now empathize with him as he begins to think of wanting a normal relationship with a girl and working a normal job and having children. The reader can empathize because now he has turned good and wants things that the reader of the novel would want. Riddley changes because he has nothing left in the tribes and wants to carry on travelling in memory of Good Parley's 'Pooty & Punch' show, the reader can sympathise with Riddley because he has lost friends through his story, he lost Lissener who he referred to as his 'moon brother' when choosing to separate, and he lost Good Parley through the accident with the gunpowder. The only friends that he can trust to stick by him are the wild dogs. To summarise all my points I think that it is fair to say that Riddley's character is far easier to sympathize and empathize with because throughout the story he is a consistently nice person, trying to see the good in people, while Alex's character throughout the story has always been focused on himself and hurting people for pleasure. ...read more.