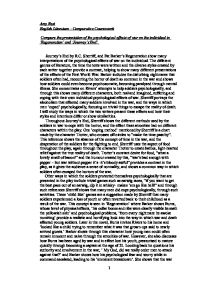 Compare the presentation of the psychological effects of war on the individual in 'Regeneration' and 'Journey's End'.

Amy Best English Literature - Comparative Coursework Compare the presentation of the psychological effects of war on the individual in 'Regeneration' and 'Journey's End'. Journey's End by R.C. Sherriff, and Pat Barker's Regeneration show many interpretations of the psychological effects of war on the individual. The different genres of literature, the time the texts were written and the diverse styles created by each writer together provide a contrast, helping to show many different presentations of the effects of the First World War. Barker includes the disturbing nightmares that soldiers often had, recounting the horror of death so common in the war and shows how soldiers could even become psychosomatic, becoming paralysed through mental illness. She concentrates on Rivers' attempts to help soldiers psychologically, and through this shows many different characters, both real and imagined, suffering and coping with their own individual psychological effects of war. Sherriff portrays the alcoholism that effected many soldiers involved in the war, and the ways in which men 'coped' psychologically, focusing on trivial things to escape the reality of death. I will study the ways in which the two writers present these effects and how their styles and intentions differ or show similarities. Throughout Journey's End, Sherriff shows the different methods used by the soldiers in war to cope with the horror, and the effect these atrocities had on different characters within the play. One 'coping method' mentioned by Sherriff is a chart made by the character Trotter, who crosses off circles to "make the time pass by". ...read more.

Regeneration however, is a modern novel, published in 1991, which explains the much more realistic, honest and graphic approach to discussing the war, as resources and information concerning the war are much more accessible and there is less worry of causing offence. A soldier providing a central focus into the concept of visions and nightmares in Regeneration is Sassoon. His strong opinions concerning war, 'this war..has now become a war of aggression and conquest' and belief that war is 'evil and unjust', provided Barker with the interesting challenge of studying the character's mind, and the effects the war had on the poet. Sassoon's hallucinations are discussed at the beginning of the novel, "I used to see...corpses. Men with half their faces shot off" and these disturbing references show the suffering of men, even in their rest or sleep, and how they often could not escape the horror as it was embedded in their minds. Sassoon had visions of his men who had died in battle, 'He woke to find Orme standing immediately inside the door...after a while he remembered that Orme was dead.' and this suggests the character's constant guilt and subconscious worry about the deaths of soldiers, men he knew and liked. The close relationship between Stanhope and Osbourne in 'Journey's End' also provides Sherriff with this concept of the constant worry and guilt soldiers often felt towards soldiers who have died, 'the one man I could trust-my best friend-who understood everything...' ...read more.

Understanding that threatening language will not persuade Hibbert to stay, Stanhope adopts a more subtle approach and empathises with Hibbert, "we both know how we feel", and this technique is successful in calming down the "hysterical" character and reducing his worry. I believe both texts are successful in portraying the many different psychological effects war and on the men involved, Barker shows various patients with their own individual struggles and conflicts concerning the war, including constant nightmares and hallucinations, the loss of youth young men often experienced and the inability to overcome and forget the explicit images they have witnessed. Through her often direct and honest approach, Barker shows a realistic and horrifying view of war and its effects on men psychologically as well as physically. Sherriff creates a considerably calmer view of the First World War, but still addresses many psychological effects war had on the soldiers, Hibbert's hysteria and fear of the war, and Stanhope's alcoholism that has escalated, contradicting his old principles. Stanhope's weakness and lack of determination to continue fighting due to the loss of his friend also shows the loss of resolve soldiers often had when faced with the constant deaths of their men, people they had built relationships with. Sherriff makes reference to the ways in which soldiers coped in the war and how many prevented becoming emotionally disturbed by 'escaping' from the horrors in their own ways. Through the texts we can see similar and contrasting effects of war, how the horror and atrocities could scar men psychologically as well as destroy lives physically. Word Count - 2, 702 1 ...read more.

This is an outstanding essay. Beautifully written, well structured with topic sentences at the beginning of each paragraph. Shows knowledge and understanding of main themes of both texts. Excellent use of quotations throughout - maybe more language analysis is needed on quotes included but overall a thoughtful focused and insightful essay.