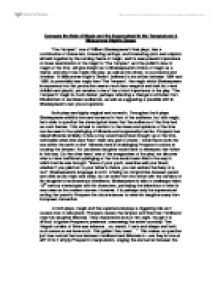 Compare the Role of Magic and the Supernatural in the Tempest and A Midsummer Night's Dream 'The Tempest', one of William Shakespeare's final plays, has a combination of characters, interesting settings, and interesting plots and subplots all held together by the running theme of magic, and its ever-present importance. A closer examination of the magic in 'The Tempest', and the public's view of magic at the time, will give insight as to Shakespeare's choice of magic as a theme, and why it has made this play, as well as his others, so successful and timeless. 'A Midsummer Night's Dream', believed to be written between 1594 and 1596, is potentially less tragic than 'The Tempest', the magic which Shakespeare incorporates into this production seems much less vengeful and dark but more childish and playful, yet remains to be of the utmost importance to the play. 'The Tempest's' magic is much darker, perhaps reflecting a change in attitudes from Elizabethan to Jacobean audiences, as well as suggesting a possible shift in Shakespeare's own pre-occupations. Both plays are highly magical and romantic. Throughout both plays Shakespeare exhibits love and romance in front of the audience, but with magic, he is able to question the stereotypical views that the audience of the time had on such themes. This refusal to conform to the views and opinions of the time can be seen in the upbringing of Miranda and supposedly Hermia. Prospero has raised Miranda similarly to how a boy would have been brought up at the time, noticeable when she says "had I been any god of power, I would have sunk the sea within the earth or ere". ...read more.

Shakespeare has to have people play the fairies and this seemed normal then as according to this essay, fairies were believed to be of human size anyway. They were also meant to be creatures that worked their magic mainly on farmland. Shakespeare changes the perception for the purpose of his play, though crucially magic is about the supernatural elements of the mythic world and each character has his or her own perspective, so experiences the magic differently. The lovers, the most impacted by magic, are totally oblivious to it. "Half sleep, half waking; but as yet, I swear, I cannot truly say how I came here". Bottom finds his wondrous dreams to be privately bewitching: "I have had a most rare vision...man is but an a*s if he go about to expound this dream," while Bottom understands that he shall be seen as crazy if he tells the others what he thinks happened to him last night, and so Shakespeare makes a comic moment out of it by incorporating a pun. These types of joke are found throughout the play. Stagecraft was much more limited in the time of Shakespeare - people went to hear a play rather than to watch it, though the importance of spectacle was, by the time of The Tempest's first performance, becoming much more recognised as a valuable feature. Masques were enjoying, during the Jacobean period, a surge of popularity. Stage mechanisms were available (trap doors and winches) but the options for creative stagecraft were much more limited. ...read more.

Out of all the motifs in the plays A Midsummer Nights Dream and the Tempest, magic is the most important of them all as it complements all of the other motifs in the play. Love and relationships can also be seen to be a key part of the play, however, I believe that magic helps orchestrate the course of the love and romance in both plays "the course of true love never did run smooth" says Lysander in A Midsummer Nights Dream and as we see in the play thanks to magic, at first it does not. Nonetheless, by the end of the play, magic has fulfilled its purpose by bringing everything into a perfect harmony as we see in the joint weddings of Theseus and Hippolyta, Demetrius and Helena, and Hermia and Lysander. In The Tempest, once again we see a misbalance of the power dynamics caused by the banishing of Prospero. Prospero then uses magic in order to at first, make things worse by causing a Tempest, and for many years having maltreated Caliban, but by the end of the play, we see Prospero relinquish his magic in order to return to the real world. The abandoning of magic is what avoids catastrophe in the play as had Prospero continued to toy with the other characters, we would never have reached the simple denouement that we do. Once again, magic has seen that order has been restored, and then it leaves the world once its purpose has been fulfilled and will return once again in another Shakespearean play. Without magic, neither play would have been able to end joyfully as they did. 1191 words ...read more.