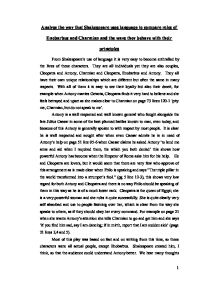 Compare the roles of Enobarbus and Charmian

Analyse the way that Shakespeare uses language to compare roles of Enobarbus and Charmian and the ways they behave with their principles From Shakespeare's use of language it is very easy to become enthralled by the lives of these characters. They are all individuals yet they are also couples, Cleopatra and Antony, Charmian and Cleopatra, Enobarbus and Antony. They all have their own unique relationships which are different but often the same in many respects. With all of them it is easy to see their loyalty but also their deceit, for example when Antony marries Octavia, Cleopatra finds it very hard to believe and she feels betrayed and upset as she makes clear to Charmian on page 73 lines 120-1 'pity me, Charmian, but do not speak to me'. Antony is a well respected and well known general who fought alongside the late Julius Caesar in some of the best planned battles known to man, even today, and because of this Antony is generally spoken to with respect by most people. It is clear he is well respected and sought after when even Caesar admits he is in need of Antony's help on page 51 line 95-6 when Caesar claims he asked Antony ...read more.

However in Rome it is all politics and status again, and their relationship is very different, as it is now formal and instead of friends they are once again Master and Servant. This is made clear on page 53, lines 115-6 when Enobarbus speaks out and Antony reminds him of their standing by saying 'thou art a soldier only. Speak no more.' When Enobarbus hears this he says 'the truth should be silent I had almost forgot' which obviously creates a lot of tension between these two characters. I think their professional relationship is made difficult by the fact that they are so close as friends, because this is why Enobarbus spoke out in the first place, because in Egypt, he would have been allowed to. Charmian is Cleopatra's personal attendant and she is very apt at dealing with Cleopatra and her moods. When Cleopatra says that she will kill the messenger Charmian proceeds to tell her to 'keep within yourself. The man is innocent.' (page 71 line 76-7) which clearly calms Cleopatra because she apologises and says she was wrong, which, considering Cleopatra's personality, is clearly not something she does often. ...read more.

which I think shows great care and affection towards Cleopatra. Enobarbus realises what he has done, leaving his master and his best friend, when he was most needed and decides to kill himself. Enobarbus' last words are for his master, as he dies he says 'O Antony! O Antony!' (page 171 line 23). Antony also dies by turning his sword on himself; however he first asked Eros to kill him, which shows that actually in the end, Enobarbus is stronger than Antony. These characters are all very similar, and yet very different and I think that, no matter how they ended up, there is still an unbreakable bond between the servants and their masters, and Shakespeare portrays this very well throughout the play. Even when there was doubt from Enobarbus, his last words were for Antony, which still shows his loyalty. Charmian lived for her queen and she died for her queen, loyal until the end. They both behave with their principles in very unique ways which just enhances their own characters and makes them stand out not only as being their principles closest servants but also as being their own individual person. ?? ?? ?? ?? 1 ...read more.