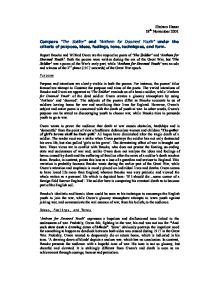 Compare &quot;The Soldier&quot; and &quot;Anthem for Doomed Youth&quot; under the criteria of purpose, ideas, feelings, tone, techniques, and form.

Hisham Hasan 18th November 2001 Compare "The Soldier" and "Anthem for Doomed Youth" under the criteria of purpose, ideas, feelings, tone, techniques, and form. Rupert Brooke and Wilfred Owen are the respective poets of 'The Soldier' and 'Anthem for Doomed Youth'. Both the poems were written during the era of the Great War, but 'The Soldier' was a poem of the War's early part, while 'Anthem for Doomed Youth' was an ode and witness of the 2nd phase (1917 onwards) of the Great War epoch. Purpose Purpose and intentions are clearly visible in both the poems. For instance, the poems' titles themselves attempt to illustrate the purpose and aims of the poets. The varied intentions of Brooke and Owen are apparent as 'The Soldier' reminds us of a heroic soldier, while 'Anthem for Doomed Youth' of the dead soldier. Owen creates a gloomy atmosphere by using 'Anthem' and 'doomed'. The subjects of the poems differ as Brooke accounts to us of soldiers leaving home for war and sacrificing their lives for England. However, Owen's subject and entire poem is concerned with the death of youth at war. In other words, Owen's purpose can be stated as discouraging youth to choose war, while Brooke tries to persuade youth to go to war. ...read more.

'A drawing down of blinds' depicts a useless war, which has no conclusion. In contrast, Brooke presents the audience with a hopeful tone of war. His tone is not so gloomy, but cheerful and elevated. It is strikingly different from Owen's and death is seen as an achievement through courage, honour and patriotism. 'In hearts at peace, under an English heaven' predicts a utopian society of peace, as a result of war. Brooke wants youth to know that this war has a deep meaning, which has a connection with sacrifice. Evident in 'Anthem for Doomed Youth' is a feeling against the hardlined, cruel, and merciless nature of war: 'What passing bells...stuttering rifles rapid rattle.' This quote may be interpreted as: 'not enough deaths...war should continue.' When an enemy soldier discovers a corpse, he has still not stopped shooting. This is obviously imitating the nature of war. However, another feeling of Owen here is that the funeral of a person is trivial; death is not so important as life. 'Passing bells' displays a funeral procession. Owen strengthens his approach here by linking 'mockeries' with funerals. Youth may be encouraged to live on rather than thinking of joining war and destructing themselves. On the other hand, death is not so trivial in 'The Soldier'. ...read more.

For example Owen represents humans dying as 'cattle'. This has great effect, as cattle die ruthless deaths. Owen uses different viewpoints to add up to one idea on which great emphasis is placed. Owen's language usage is more indirect and needs more understanding than Brooke's because of his (Brooke's) generalisation. The form of both poems is a sonnet. The order goes like this: octet (1st stanza) and sestet (2nd stanza). In 'The Soldier' the octet talks about the war and the sestet about the after-war. However, Owen does not differentiate between the two stanzas. He focuses on death and life. This makes his poem centred, powerful, and intense. His poem is also more fast-paced which makes it informal. Brooke's rhythm scheme makes 'The Soldier' more formal. Effectiveness of the poems is quite difficult to judge. Both of the poems dwell on their subjects and create equally powerful accounts. In my view, I think 'The Anthem for Doomed Youth' is a more effective poem, because Owen's balanced ideas on life and death. It is very realistic and quite emotional. The poet's character can be judged from the poem. While being effective, Brooke also seems to be too idealistic. His love for his nation is immense and he hopes everyone was as patriotic as him. I liked the two poems and immensely enjoyed reading them. Both of the poems contain great substance and meaning and stir up one's conscience to think about the poet's achievements. ...read more.