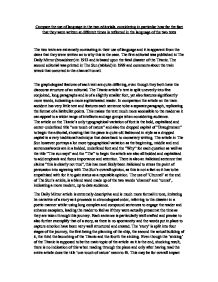 Compare the use of language of the two editorials

Compare the use of language in the two editorials, considering in particular how far the fact that they were written at different times is reflected in the language of the two texts The two texts are extremely contrasting in their use of language and it is apparent from the dates that they were written as to why this is the case. The first editorial was published in The Daily Mirror (broadsheet) in 1912 and is based upon the fatal disaster of the Titanic. The second editorial was printed in The Sun (tabloid) in 1999 and comments about the train wreck that occurred in the channel tunnel. The graphological features of each text are quite differing, even though they both have the discourse structure of an editorial. The Titanic article's text is split unevenly into five conjoined, long paragraphs and is of a slightly smaller font, yet also features significantly more words, indicating a more sophisticated reader. In comparison the article on the train accident has very little text and features each sentence to be a separate paragraph, replicating the format of a list/bullet points. This makes the text much more accessible to the reader as it can appeal to a wider range of intellects and age groups when considering audience. ...read more.

The 'story' is split into four stages of the journey, the first being the planning of the ship, the second the actual building of it, the third the launching of the Titanic and the fourth the sinking. Even though the 'sinking' of the Titanic is supposed to be the main topic of the article as it is the end, shocking result, there is no indication of this when reading through the piece and only after having read the entire article does the title 'one touch of nature' seem to fit. This may be for overall impact and to embody the 'story' like structure as without preconceptions the reader would not know that this was to be the outcome. There is a technique of parallelism in the first article which makes up the second paragraph with the sentence 'work of the disciplined hand was to follow labour of directing mind' creating a balanced sentence. There is also the literary use of opposites (antithesis) supporting the notion that the text is well crafted with the sentence 'A permanent population is appointed to live here, with the changing passengers ready to begin the voyage...' ...read more.

the constant and bolded use of 'why' to highlight six main questions, taking a very direct approach and using a major public campaigning aspect) and proceeds to group the reader into asking these questions themselves through its high use of persuasion and collectives. For example, 'the one thing everyone feared...', 'but we were assured...', 'the public deserves...', all of these sentences are persuading and trying to engage the reader through the use of possessive pronouns 'we', 'our' and collectives 'everyone' and even commenting that the public 'deserves' an explanation, taking an extremely personal yet quite informal tone to connect with the reader and attach with their apparent views. The opening, second heading 'Black Hole' is a pun/metaphor which also ends the article and shows how newspaper headlines are written at this present time (they have to be catchy, short and are usually in some form of a pun) as opposed to when The Daily Mirror article was written as the heading mimics a story like title. Overall, the language and techniques used in each editorial greatly highlight and portray their differing published times and although their subjects are quite similar, the portrayal of each is very different through numerous aspects of language and lexical change. ...read more.