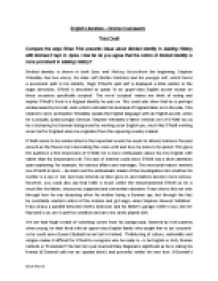 ﻿English Literature ? Drama Coursework Third Draft Compare the ways Brian Friel presents ideas about divided identity in Making History with Michael Frayn in Spies. How far do you agree that the notion of divided identity is more prominent in Making History? Divided identity is shown in both Spies and Making Historyfrom the beginning. Stephen Wheatley has two voices, his older self (Stefan Weitzler) and his younger self, which forms a prominent split in his identity. Hugh O?Neill?s split self is displayed a little subtler in the stage directions. O?Neill is described to speak ?in an upper-class English accent except on those occasions specifically scripted?. The word ?scripted? makes me think of acting and implies O?Neill?s front is a feigned identity he puts on. This could also show that he is perhaps embarrassed by his Irish roots which contradict his betrayal of England later on in the play. This relates to Spies as Stephen Wheatley speaks the English language with an English accent, when he is actually (unknowingly) German. Stephen Wheatley?s father reminds me of O?Neill too as he is betraying his German background by working as an English spy, much like O?Neill working as an Earl for England when he originates from the opposing country Ireland. O?Neill seems to be uninterested in the important events he needs to attend, butmore focused onsuch as the flowers he?s decorating the room with and how he looks in his jacket. ...read more.

digging and dunging, and trimming and pruning, forever undercoating and painting, and wiring and rewiring, forever making perfection yet more perfect?)to present the character?s compulsive attitude. The attention of his gardening tends to be on the roses which could be symbolic in a patriotic way ? roses are a typical English flower ? and the way he is described to be planting them sounds like he?s building a fort to keep out ?enemies? (the German, Wheatley family). The privet flower (a misspelling of ?private? by Keith) signified privacy, but had a suffocating smell; whenever Stephen was in the ?privet? with someone else there was often a stifled atmosphere. I think this smell indicated the uncomfortable stage at the start of puberty, where people start to discover their identities in more detail. The elder trees were outside the safe cul-de-sac, near to Uncle Peter?s hideaway which similarly represented Stephens?s admission into the adult world and puberty. In the first scene, O?Neill presents Mabel with a ring which is symbolic as it was made in London ? the capital of the country Ireland are enemy with ? and the only person to have one is the Queen of England, Elizabeth. This moment is like the initiation of Mabel?s new identity when Mabel changes ?we?re a tough breed the upstarts? to the ?O?Neill?s? being the ?tough breed?. This is similar to Mrs Hayward wearing her cravat to cover her abuse symbolising the initiation of her oppression. ...read more.

O?Neill even tells O?Donnell ?What you see is what I have? showing the loss of all the materialistic things that he had before. For the audience, it is immediately made obvious that Ireland have lost the war and O?Neill is symbolically on his knees as he is writing a letter to Queen Elizabeth begging for forgiveness and his old job. When Harry arrives in the scene, he comes with news of Mabel?s death through blood poisoning, which is representative that she?s been poisoned by O?Neill?s Irish blood. In Spies, there is a recurring theme, just like the blood in Making History, of the train getting closer and closer which builds tension until finally Uncle Peter significantly killed by it.Frayn again uses repetition to create this suspense all throughout the book, from just mentioning the train line to the intimidating ?huge thunder of the train? when he is in the tunnel. My final point is of course about the making of the history itself. It is apparent from the start that Lombard was going to exaggerate in the book, but by the end we know he used O?Neill so Roman Catholics could have an idol. This shows when the grieving (even after many years) and drunken O?Neill is staggering about his room, reading sentences like ?noblest son of noble lineage? and that he grew in ?comeliness and urbanity, tact and eloquence, wisdom and knowledge? that supposedly describe him. Divided identity is the main theme of the play, whereas in Spies it is just one of the many readings of the novel.Why? Alice Morris ...read more.