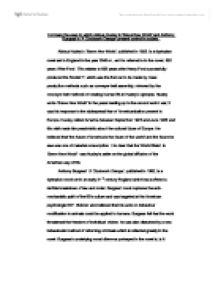 Compare the ways in which Aldous Huxley in Brave New World and Anthony Burgess in A Clockwork Orange present control in society.

Compare the ways in which Aldous Huxley in 'Brave New World' and Anthony Burgess in 'A Clockwork Orange' present control in society. Aldous Huxley's 'Brave New World', published in 1932, is a dystopian novel set in England in the year 2540 or, as it is referred to in the novel, 632 years 'After Ford'. This relates to 632 years after Henry Ford successfully produced the 'Model T', which was the first car to be made by mass production methods such as conveyor-belt assembly, mirrored by the conveyor-belt methods of creating human life in Huxley's dystopia. Huxley wrote 'Brave New World' in the years leading up to the second world war; it was his response to the widespread fear of Americanisation present in Europe. Huxley visited America between September 1925 and June 1926 and this visit made him pessimistic about the cultural future of Europe. He believed that 'the future of America is the future of the world' and the future he saw was one of material consumption. It is clear that the 'World State' in 'Brave New World' was Huxley's satire on the global diffusion of the American way of life. Anthony Burgess' 'A Clockwork Orange', published in 1962, is a dystopian novel set in an early 21st century England which has suffered a terrible breakdown of law and order. Burgess' novel captures the anti-mechanistic spirit of the 60's culture and was targeted at the American psychologist B.F. ...read more.

'Moloko plus' is 'milk plus something else' and in the case of Alex and his friends is 'milk with knives in it' this is more of a amphetamine type of drug as it 'would sharpen you up'. The difference between the two drugs in the novels is that 'soma' is issued by the 'World State' to control the feelings of its citizens whereas 'Moloko plus' is used by choice as it is not yet illegal to use the chemicals that are put into this milk, 'but there was no law yet against prodding some of the new veshches which they used to put in the old moloko,' As seen from this quotation Burgess A Clockwork Orange uses a very distinct language which is know as 'nadsat' and although the language is essentially Anglo-American many of the words are of Slavic origin. The 'nadsat' language is used by Burgess to make the reader feel included in Alex's world as the reader begins to understand the 'nadsat' language but is also able to create distance when used in violent sections on the novel as the reader is able to exclude themselves from Alex's group as the reader themselves do not use the 'nadsat' language. A Clockwork Orange's is patterned like a musical form and its three part structure is common of an operatic aria. This is not accidental as Burgess' love of classical music saw him aspiring to make his writing have the form of classical music. ...read more.

Suddenly she put her arms around him and kissed him again and again.' However the act of hugging and kissing John and showing mercy for him tells the reader that Linda's conditioning cannot over power a mothers feelings for their offspring. The apparent constant happiness which keeps the society running smoothly is also a very dark element since soma has taken away the right to be unhappy or have unhappy thoughts. In Burgess' novel, although the violence is abundant, the control element in the novel is definitely not as disturbing as Alex knows what has happened to him. The citizens in Brave New World, although aware that they are conditioned, as most of them work in the 'Hatchery and Conditioning Centre' and take some part in the conditioning process, are conditioned not to question their lack of choice and their conditioning. Alex, however, is still able to make choices and although his choices about violent acts or s****l desires after he has been conditioned are controlled by the violent sickness he feels, he is still able to freely think of these things, unlike the citizens of Brave New World as their conditioning does not allow them to think freely. Alex is controlled by more than the government in A Clockwork Orange, he is also controlled by F. Alexander and his group. When they hear of the pain he feels when hearing classical music they try to make him kill himself and although this is partly due to F. Alexander realising who Alex is, it is also to make a point to the government for their cause. Word Count 1,619 ?? ?? ?? ?? ...read more.