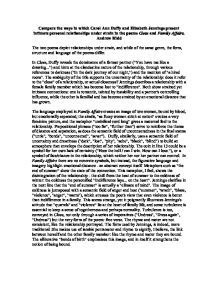 Compare the ways in which Carol Ann Duffy and Elizabeth Jennings present intimate personal relationships under strain in the poems Close and Family Affairs. Andrew Kidd The two poems depict relationships under strain, and while of the same genre, the form, structure and language of the poems differ. In Close, Duffy reveals the dominance of a former partner ("You have me like a drawing...") and hints at the clandestine nature of the relationship, through various references to darkness ("In the dark journey of our night,") and the mention of "a hired room". The ambiguity of the title supports the uncertainty of the relationship: does it refer to the "close" of a relationship, or actual closeness? Jennings describes a relationship with a female family member which has become lost to "indifference". Both show strained yet intimate connections: one is romantic, tainted by instability and a partner's controlling influence, while the other is familial and has become strained by an emotional distance that has grown. The language employed in Family Affairs creates an image of two women, bound by blood, but emotionally separated; the simile, "as fussy women stitch at cotton" evokes a very feminine picture, and the metaphor "umbilical cord long" gives a maternal feel to the relationship. ...read more.

but the very form of the poem: free verse. The rhyme and meter are not consistent, like the relationship portrayed. The form used by Jennings, is indeed, more traditional. She makes use of iambic pentameter and rhyme to signify, I believe, the link between herself and the other family member: like the rhyme and meter they are bound. The alliterative "bonds of birth" emphasises this image, and in itself it strengthens the notion of being bound. Both poems make use of structural devices but to disparate effects. Enjambement runs throughout Close, which in my opinion creates a sense of the poet's confusion; lines frequently end in the middle, then continue on to the next line in a disjointed manner. Some may interpret this enjambement as representing the rush of feelings in the relationship or as supplementary to the unstable, perturbed atmosphere. I feel it is representative of the poet's confused thoughts. This device is also employed in Jennings's poem, reflecting disconnection in the relationship through structure ("Unconnected by / The blood we share?"). Foregrounding is another device shared between the poems. ...read more.

Moreover, the use of the lexeme "signed" implies ownership - a bond - almost certain to result in strain due to the unequal balance of power. While the poem is very sexualised, Duffy persists "Love won't give in." As has been discussed, the bond in Family Affairs is familial, though whether it is between a mother and daughter or between sisters is ambiguous. Femaleness definitely pervades the poem. The past, too, has purport to both pieces: in Family Affairs it is because of past action, or more accurately 'inaction', that the relationship has reached a stage of apathy. In Close the past is seen as something inescapable ("The ghosts of ourselves behind and before us, throng in a mirror") which has not only shaped the current situation, but will continue to shape everything - ever-present in her personal life as the childhood in the bedroom. The inability to be open, domination and the past are all contributing factors to strain in Close; Family Affairs uses the notion of distance to show how strained the intimate family bond has become, like an elastic band that has been stretched to its limits. The two poems convey these feelings exceptionally well. ...read more.