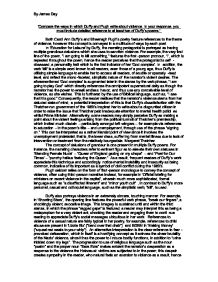 Compare the ways in which Duffy and Pugh write about violence. In your response, you must include detailed reference to at least two of Duffys poems.

'Compare the ways in which Duffy and Pugh write about violence. In your response, you must include detailed reference to at least two of Duffy's poems.' Both Carol Ann Duffy's and Sheenagh Pugh's poetry feature references to the theme of violence, however this concept is conveyed in a multitude of ways by each poet. In 'Education for Leisure' by Duffy, the narrating protagonist is portrayed as having multiple grandiose delusions which she uses to sanction violence. For example, the very first line of the poem, "I am going to kill something," features the first-person pronoun, 'I', which is repeated throughout the poem, hence the reader perceives that the protagonist is self-obsessed, a personality trait which is the first indicator of her 'God complex'. In addition, the verb 'kill' is a simple word known to all readers, even those of a young age, thus Duffy is utilising simple language to enable her to access all readers, of erudite or sparsely-read level, and reflect the mono-faceted, simplistic nature of the narrator's violent desires. ...read more.

As a result, frequent readers of Duffy's work appreciate this technique and accordingly notice mental instability and insecurity as being common, indicative of its important as a symbol of civil conflict during the 1980's. Pugh seldom relies on the form of first-person monologue to convey the concept of violence, often using third-person narrative instead, for example in 'Official briefing for ministers on recent violence in the capital', wherein much more sophisticated, formal language such as "a disaffected itinerant" and "minor youth cult", in contrast to Duffy's more personal, casual and colloquial language, such as the simplistic verb, "kill", is used. Duffy also portrays violence in an extremely sincere, touching manner. For example, in 'Shooting Stars', the opening line features the powerful verb phrase, "break our fingers", a shockingly violent, evocative image. This imagery is sustained until and within the third stanza, in which the phrase "ragged gape" is featured; a reader may interpret this as being a malapropism for a very violent act, shocking the reader and engaging them to continue reading to appreciate Duffy's social messages ubiquitous in her work. ...read more.

after revenge." Unlike her usual style of a subdued, rather formal tone, Pugh uses somewhat violent language herself as a response to the violent group in the denigratory noun, 'mediocrities', conveying her hatred explicitly to the reader. The same sentiment is expressed in 'Birmingham Navigation graffiti', wherein violence of inhabitants of the eponymous city is mirrored by complementary violent language such as "women are all slags, gas the queers, f**k you." The reader responds to this, as they would when Duffy exploits controversial lexicon, by being shocked into an emotionally receptive state, rendering them more prone to receiving the social messages present in the texts. This is not very typical of Pugh's poetry, only occasional, as very few of her poems feature such overt, unadulterated irate language. In conclusion, it is evident that Duffy and Pugh address violence in generally idiosyncratic ways, however each poet does sometimes use a technique which seems somewhat incongruous with their regular style, in order to induce a novel response from the reader contrasted with the normal reaction. ?? ?? ?? ?? By James Day ...read more.