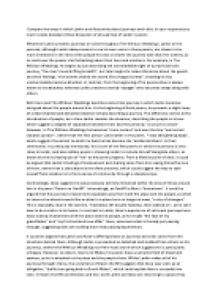 Compare the ways in which Larkin and Abse write about journeys and visits.

﻿Compare the ways in which Larkin and Abse write about journeys and visits. In your response you must include detailed critical discussion of at least two of Larkin?s poems. Whenever Larkin presents journeys or visits throughout The Whitsun Weddings, Larkin or the persona, although Larkin always seems to use his own voice in these poems, are shown to be more interested in the lives of the people he sees or shares the journey with than the scenery, as he continues the poems into fantasizing about their lives and emotions. For example, in The Whitsun Weddings, he begins by just describing the unremarkable sight of a provincial train journey, ?the river?s level drifting breadth?, but later begins to make inferences about the guests and their feelings, ?the women shared the secret like a happy funeral?, showing his has unintentionally become attached. In contrast, from the beginning of his poems Abse is always shown to be attached, whereas Larkin presents a lonely ?voyager? who becomes swept along with others. Both Here and The Whitsun Weddings describe a lone train journey in which Larkin becomes intrigued about the people around him. At the beginning of both poems, he presents a slight irony of a disenchanted and detached observer simply describing a journey. ...read more.

Although Larkin is presented as detached and isolated from others on his journeys, neither the Whitsun Weddings nor Here hold a tone which suggests he is particularly unhappy. However, on Abse?s returns to Wales, his poems have a semantic field of dread and sadness, as he is attached to the place and the people there. Whilst Larkin makes all of his journeys through choice, the undertone of Down the M4 suggests that Abse sees visits as an obligation, ?dutiful son going back to South Wales?, which could explain Abse?s unusually low tone. In Down the M4 and Dockery and Son, both Larkin and Abse are returning to a place they spent a significant period of their life. For Larkin, what begins as a visit to presumably his university a more metaphorical journey, as he realises his own isolation and lack of attachment to anywhere or anyone through comparisons with Dockery. However, it could be argued that Larkin was always aware of this, as even at the beginning he is gently mocking his lone ?death suited? figure who attempts to reengage with the past, ?I try the door of where I used to live? buts finds it ?locked? and departs on the train ?ignored?. This suggests an awareness of the presentation in these poems of an unnoticed figure simply ?passing through?, which could be argued ...read more.

However, Larkin addresses the wider issue of the journey towards death, suggesting through the image of the ?thick and close sand clouds? that it?s closing in. The last two lines of the poem could be interpreted as suggesting we have no control over the journeys we make in life, ?what something hidden from us chose?, however this could merely be an attempt by Larkin to comfort himself. When writing about journeys, Larkin leaves himself exposed by showing direct involvement without the protection of a persona. He presents different degrees of involvement with the lives of those he passes, as in Here he is merely supposing about the lives of ?residents from raw estates? whereas in the Whitsun Weddings, he includes himself in his descriptions, pondering on the directions of their lives will take. It could be argued then that the Whitsun Weddings isn?t simply about his own train journey but about the journeys of the ?fresh couples? in their lives. In contrast, Abse is solely focused on his own journey and that of those close to him, suggesting that involvement with people or places can lead to narrow sightedness about the world around, as it simply passes by unnoticed. Finally, as could arguably be expected of Larkin, he leaves all three poems on a note of discomfort about the possibility of death and uncertainty at the end of the journey, suggesting our journeys are beyond our control. ...read more.