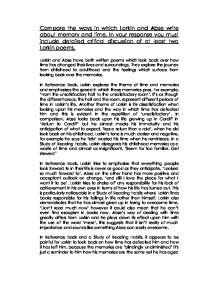 Compare the ways in which Larkin and Abse write about memory and time. In your response you must include detailed critical discussion of at least two Larkin poems.

Compare the ways in which Larkin and Abse write about memory and time. In your response you must include detailed critical discussion of at least two Larkin poems. Larkin and Abse have both written poems which look back over how time has changed their lives and surroundings. They explore the journey from childhood to adulthood and the feelings which surface from looking back over the memories. In Reference Back, Larkin explores the theme of time and memories and emphasises the speed in which these memories pass. For example, 'From the unsatisfactory hall To the unsatisfactory room', it's as though the different areas, the hall and the room, represent different periods of time in Larkin's life. ...read more.

In a Study of Reading Habits, Larkin disregards his childhood memories as a waste of time and almost as insignificant, 'Seem far too familiar, Get stewed:' In Reference Back, Larkin tries to emphasise that everything people look forward to in their life is never as good as they anticipate, 'Looked so much forward to', Abse on the other hand has more positive and acceptant outlook on change, 'and still I love the place for what I want it to be'. Larkin tries to shake off any responsibility for his lack of achievement in his own eyes in terms of how his life has turned out. This is particularly noticeable in a Study of Reading Habits where Larkin finds books responsible for his failings in life rather than himself. ...read more.

time has defeated him and how it has left him, because the memories are 'blindingly undiminished' it's just a reminder to him how his memories are the same yet he has aged and in his eyes, for the worst. Yet for Abse, each thing that triggers a memory such as 'cigarette' seems to make him happy and nostalgic which is why they are placed on their own in terms of the structure of the poem, to highlight his acceptance. To conclude, although both Larkin and Abse write observational and descriptive poems, it is the overall tone of these poets which separate them. Larkin is generally dismissive of any hope or positives where as Abse accepts that time is an unavoidable fact of life is and that things change. ?? ?? ?? ?? ...read more.