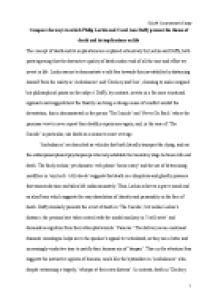 Transfer-Encoding: chunked ﻿ELLA4 Coursework Essay Compare the ways in which Philip Larkin and Carol Ann Duffy present the theme of death and its implications on life The concept of death and its implications are explored extensively by Larkin and Duffy, both poets agreeing that the destructive quality of death makes void of all the time and effort we invest in life. Larkin seems to demonstrate a cold fear towards this inevitability by distancing himself from the reality in ?Ambulances? and ?Dockery and Son?, choosing to make resigned but philosophical points on the subject. Duffy, by contrast, invests in a far more emotional approach and suggests how the finality can bring a strange sense of comfort amidst the devastation; this is demonstrated in the poems ?The Suicide? and ?Never Go Back? where the personas vow to never repeat their deathly experiences again, and, in the case of ?The Suicide? in particular, use death as a means to exact revenge. ?Ambulances? are described as vehicles that both literally transport the dying, and are the anthropomorphised psychopomps who help establish the transitory stage between life and death. The fairly archaic yet idiomatic verb phrase ?borne away? and the use of determining modifiers in ?any kerb: / All streets? suggests that death is a ubiquitous and ghostly presence that transcends time and takes life indiscriminately. Thus, Larkin achieves a grave mood and an aloof tone which suggests the easy dissolution of identity and personality in the face of death. Duffy similarly presents the event of death in ?The Suicide?, but unlike Larkin?s distance, the persona here takes control with the modal auxiliary in ?I will write? and demands recognition from their attempted suicide: ?Famous.? The delivery as an emotional dramatic monologue helps serve the speaker?s appeal to victimhood, as they use a bitter and increasingly vindictive tone to justify their heinous sin of ?despair?. This cry for attention thus suggests the instinctive egoism of humans, much like the bystanders in ?Ambulances? who, despite witnessing a tragedy, ?whisper at their own distress?. ...read more.

assonance invokes the sighing sound of the narrator as his summary of life, ‘unique blend of families and fashions’ is chased into the final verse where it is unravelled, the dynamism evoking the sense of continuity of time. The noun phrase ‘exchange of love’ denotes how life is a contractual obligation but is only temporary as the endgame is ‘to lie unreachable inside a room’ which connotes the undeniable loneliness in death. However, Larkin persists in remaining vague as he describes death with the euphemism ‘what is left to come’, thus establishing how death remains as an unspoken truth in society. Similarly, Duffy shows how the concept of death governs people in ‘The Suicide’ where the persona’s increasingly vindictive mood culminates into unrepentantly spitting out imperatives to the readers: ‘f**k off. / Worship.’ The speaker here shows an awareness of the readers’ voyeurism who are compelled to follow her path to self-destruction and watch her play god as she ‘lies under the lightbulb’, literally suggesting the exposure to truth and figuratively conveying a sensual submission to her ‘lightbulb’ moment of self-inflicted death. However, we see the persona’s captivation is to the point of delusion. The dismissive tone and metaphor for life in ‘Who wants / a b****y valentine pumping its love hate love?’ offset by the deviantly collocated ‘b****y’ alongside the iambic dimeter, attributes the sound of two heartbeats to her confused valentine’s ‘love hate love’. Duffy thus suggests that reflecting over the fragility of life can drive a person to madness and, as Larkin suggests, there is a conservative view that promotes the secrecy of death, indicating how people fearfully deny death in their lives due to its ability to expose human frailty which may be seen as an uncomfortable consequence of death. Structurally, Duffy's haphazardly contained verses and the speaker's punning clichés such as ‘I take out the knives’ create a more heartfelt cognisance of death as something looked for and desirable, whereas Larkin’s standardised verses convey his reliable but frigid outlook on the subject. ...read more.

There is thus a sense of futility in life inspired by the news of a young man?s death, as Larkin concludes that even our choices are obscurely decided by ?something hidden from us chose?, the vague pronoun ?something? suggesting how the workings of life is beyond our comprehension while death remains a certainty that levels everyone in due time. ?Never Go Back? similarly concludes with the idea that life is governed by a mysterious entity, except here, it is explicitly denoted as greed and human desire. The crude images of the ?sly sums of money? and ?a drenched w***e? connote a sense of the decay and degression found in society?s apparent hedonism. This enables death to run in parallel with life, as even the associated taxi driver is described by the cliche ?looks like death?. Ironically, the speaker demonstrates how this illusion of life, and its false evolution, allows possibilities to remain open; the hollow sounds in the pronoun ?nowhere? and neologism ?nowhen? dissolves the significance of time and space, and instead grants importance to the present by the homely image of ?the fires and lights come on wherever you live?. By comparison, Larkin suggests a sense of entrapment by the facade as ?what we think truest . . . warp tight-shut?; the harsh syllables in the modifier ?tight-shut? elicit a sense of urgency as the speaker realises he is running out of time to achieve what he wishes, yet the possibilities remain cut off in ?Dockery and Son? due to the speaker?s acute awareness of death. In conclusion, Larkin and Duffy both demonstrate the omnipresence of death in our lives. Larkin uses his unassuming observations to describe death as an inescapable component of everyday life, thus suggesting that his point of enlightenment in ?Dockery and Son? marks too as a pessimistic beginning of the end. Duffy chooses to manifest death in everyday components of life, normalising death, and instead, offers the view in ?Never Go Back? that death provides a chance to understand that the past is gone, and also as a catalyst for hopeful beginnings. ...read more.