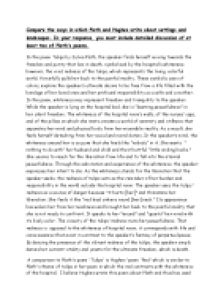 Compare the ways in which Plath and Hughes write about settings and landscapes. In your response, you must include detailed discussion of at least two of Plath's poems.

﻿Compare the ways in which Plath and Hughes write about settings and landscapes. In your response, you must include detailed discussion of at least two of Plath's poems. In the poem Tulips by Sylvia Plath, the speaker finds herself moving towards the freedom and purity that lies in death, symbolized by the hospital?s whiteness; however, the vivid redness of the tulips, which represents the living, colorful world, forcefully pulls her back to the painful reality. These symbolic uses of colors, explore the speaker?s ultimate desire to be free from a life filled with the bondage of her loved ones and her profound responsibility as a wife and a mother. In the poem, whiteness may represent freedom and tranquility to the speaker. While the speaker is lying on the hospital bed, she is "learning peacefulness" in her silent freedom. The whiteness of the hospital room?s walls, of the nurses? caps, and of the pillow on which she rests creates a world of serenity and stillness that separates her mind and physical body from her miserable reality. As a result, she feels herself detaching from her social and moral duties. In the speaker?s mind, the whiteness around her is so pure that she feels like ?nobody? in it. ...read more.

Everything was red from the 'ceiling to floor', the settings of their room was like a 'throbbing cell' in which set his heart pounding. The only colour that escaped from Sylvia were the bookshelves which can represent a glimpse of hope and meaning to the both of them. 'The Moon and the Yew Tree' was written by Plath in the same year that she wrote the poem 'Tulips'. She sets the poem in a very gloomy and dark atmosphere giving a very negative and deathly element to the poem. It is a desolate poem, haunting in its imagery and the empathy it inspires. The poem's first line states that it is "cold and planetary" suggesting there is no warmth, no bloom, no fertility and is almost like a moonscape linking back to the poem's title. The only vegetation (besides the yew, which doesn't really exist for us, it hasn't appeared yet) are those "grasses," which are strangely alive, clutching at her, weeping and "unloading their grief's," begging her as if she's, for mercy "murmuring of their humility." In other words, the grasses think she is God because they've never seen Him, He is absent suggesting this is a godless universe and that the character is in an unholy land, reinforcing the evil and deathly element of the poem. ...read more.

Plath's colours add to the poem, sending raw emotion at the reader. The Blacks, blues, and whites depict different images such as a sky on a clear day, and the sky black as a moonless night. A comparison to Plath's poem 'The Moon and the Yew Tree' is Hughes poem 'Full Moon and Little Frieda'. By closely describing stationary, unnoticeable things, Hughes is able to create the suspense which helps to amplify the climax. The imagery of a pail full of water adds to the idea of anticipation that it is ?still and brimming? which portrays the expectation of an event about to happen. A pail is used well as imagery because when the water is full up to the brim, the water toppling perfectly visualizes the tense climate of the poem. A ?tremor? is all a pail needs to tip out its content and thus foreshadows some action. Little Frieda is so innocent and pure such that she cries out ?moon? as if it was a scientific breakthrough. It is almost as if the moon is jealous of her purity, because moon itself connotes purity and is quite taken back to find a more innocent person which is suggested by the repetition of ?amazed?, showing the anxiety of the moon. ...read more.