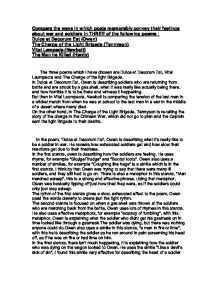 Compare the ways in which poets memorably convey their feelings about war and soldiers in three of the following poems : Dulce et Decorum Est (Owen), The Charge of the Light Brigade (Tennyson), Vitai Lampada (Newbolt), The Man he Killed (Hardy).

Compare the ways in which poets memorably convey their feelings about war and soldiers in THREE of the following poems : Dulce et Decorum Est (Owen) The Charge of the Light Brigade (Tennyson) Vitai Lampada (Newbolt) The Man he Killed (Hardy) The three poems which i have chosen are Dulce et Decorum Est, Vitai Laumpacta and The Charge of the light Brigade. In Dulce et Decorum Est, Owen is describing soldiers who are returning from battle and are struck by a gas shell, what it was really like actually being there, and how horrible it is to be there and witness it happening. But then in Vitai Laumpacta, Newbolt is comparing the tension of the last man in a cricket match from when he was at school to the last man in a war in the middle of a desert where many died. On the other hand, in The Charge of the Light Brigade, Tennyson is re-telling the story of the charge in the Crimean War, which did not go to plan and the Captain sent the light Brigade to their deaths. In the poem, 'Dulce et Decorum Est', Owen is describing what it's really like to be a soldier in war. He reveals how exhausted soldiers get and how slow their reactions get due to their tiredness. In the first stanza, owen is describing how the soldiers are feeling. He uses rhyme, for example "Sludge/Trudge" and "Boots/Hoots". Owen also uses a number of similes, for example "Coughing like hags" is a simile which is in the first stanza. ...read more.

The mood is very glorious and heroic. The first image created in the viewers mind is the "Valley of Death". In the word "death", Tennyson uses a capital 'D', i think that this is trying to personify Death with a person. Such as the 'Grim Reaper', maybe he is trying to say that the soldiers charging into the valley will not a slow, painful death, but a fast, painless death. Using the phrase "Valley of Death" also makes the soldiers sound more heroic, as if they know they are going to die down there, but they are doing it for their country and their families. Each of the two poems have a different paced rythm. Owen uses words to create a slow, exhausted rythm. As if it was in-tune to the men slowly marching along, nearly asleep. On the other hand, Tennyson uses a fast paced rythm. The words fit in to tune with what is most probably the rythm of the horses galloping. Between these two poems there are two main differences. 'Dulce et Decorum Est' was set in the First World War, while 'The Charge of the Light Brigade' was set in the Crimean War. But the main difference is that 'Dulce et Decorum Est' is trying to show the horrors of the war in detail, while 'The Charge of the Light Brigade' is trying to show that war was heroic, and is not in great detail. The poem 'Vitai Lampada' was written by Henry Newbolt who lived from 1862-1938. ...read more.

He thinks that the "Charge of the Light Brigade" was a honourable and glorious War event in the Crimean War. His opinion on War is entierly different to Owen's. He did not make his poem sound sort of slow and droopy like Owen's, he used a rythm of the sound of the soldier's horses galloping, adding to the effect of honour. Overall, Tennyson's view on War was honourable and glourious, he believed may have believed that the soldiers were lucky to die in such a 'honourable' way. On the other hand, there is Newbolt, the writer of "Vitai Lampada", again, he has a different view of War to the other two poets. Just like Tennyson, Newbolt was not actually a witness of this battle, but he still wrote a poem on it from other people's accounts and from the newspapers etc. So he did not know entirely what it was like being a soldier in a battle. Although he knows it is bloody and gory, and a terrible sight, he refers War to being like a game. He relates War to a cricket match he has when he was a young boy. Im not so sure i agree with that, but that is his opinion I believe. Unlike Tennyson's poem, this is not about glory or fame, but for the sake of taking part, while Tennyson's poem is about fame and glory. In that way of looking at it, they are kind of opposites to eachother in that way. In this poem, Newbolt has contained a lot of tension. Being the last man in a cricket match or being the last man in a battle, the outcome is in their hands, this creates a great amount of tension. ...read more.