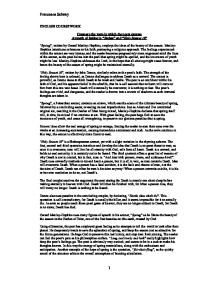 Compare the ways in which the poets express strength of feeling in &quot;Spring&quot; and &quot;Holy Sonnet 10&quot;

ENGLISH COURSEWORK Compare the ways in which the poets express strength of feeling in "Spring" and "Holy Sonnet 10" "Spring", written by Gerard Manley-Hopkins, employs the ideas of the beauty of the season. Manley-Hopkins introduces references to his faith, portraying a religious approach. The feelings experienced within the sonnet are very intense, and the reader becomes progressively more engrossed amid the lines of the sonnet, as the poet delves into the peril that spring might be spoiled, and the innocence of youth might be lost. Manley-Hopkins addresses the Lord, in the hope that all sinning might cease forever, and hence the beauty of the season of spring might be maintained eternally. "Holy Sonnet 10", written by John Donne, similarly refers to the poet's faith. The strength of the feeling shown here is colossal, as Donne challenges to address Death as a coward. The sonnet is powerful, as Donne dares to think Death to be weak and feeble. The poet is so confident within his faith of God, and his apparent belief in the afterlife, that he is self assured that no harm will come to him from this one vain beast. Death will eventually be overcome; it is nothing to fear. The poet's feelings are vivid, and dangerous, and the reader is thrown into a reverie of shadows as such immoral thoughts are taken in. "Spring", a Petrarchan sonnet, contains an octave, which sets the scene of the ultimate beauty of spring, followed by a concluding sestet, revealing its real imperfections. Just as Adam and Eve committed original sin, resulting in the Garden of Eden being ruined, Manley-Hopkins declares that spring itself will, in time, be ruined if we continue to sin. With great feeling, the poet begs God to save the innocence of youth, and cease all wrongdoing, to preserve our glorious paradise that is spring. Run-on lines allow the real energy of spring to emerge, forcing the reader to scan their eyes over the words at an increasing acceleration, causing tremendous excitement and rush. ...read more.

"Look little low heavens", a quotation describing the thrushes' eggs, shows considerable feeling as the poet likens the eggs to something as beautiful and as perfect as heaven. The poet genuinely cares for saving springtime, and is doing his best to convey all of his ideas and views. "Shoot", describing the movement and the growth of plants, shows the energetic development of spring. The anticipation of the poet in the first few lines is phenomenal, as he places every aspect of spring with a brief yet vivid description, down into the depths of his sonnet. The newness of the new season has caused the poet to be overjoyed in awe of such splendour. There is no wonder that the poet wants to keep such beauty forever. Manley-Hopkins addresses Jesus, "Oh maid's child", and with such compassion and emotion. The maid is the Virgin Mary, and her child, of course, is Jesus. The poet desperately wants for an all-powerful figure from above to listen to his pleas. The poet's feelings are deep, and he begs for all sinning to be ceased. The poet begs God to preserve the innocence of youth, the girl and the boy, disallowing them to sin, therefore saving spring. It is as though God is the poet's last hope, as he begs him to make a change. The poet realises the true beauties of spring, and prays that they are not taken from man, as the Garden of Eden was taken from Adam and Eve. Great feeling is employed through the run-on lines, as the sonnet accelerates and becomes increasingly more energetic and fluent. Stressed words allow the reader to fixate on a precise image in their mind of perhaps what the poet was seeing, or how the poet was feeling. Also, at the times when the sonnet is specifically addressed to Jesus, or to the Lord, a more direct and powerful approach is taken, and the reader feels part of something very real, and very important: a decision, and a commitment summoned for to the heavens. ...read more.

Donne is as genuine as he could ever possibly be, and his faith is obviously a massive part of his life. His feelings are conveyed in such a way that the reader is entirely engrossed into the diction of the sonnet. In my opinion, although both sonnets are very successful and portray great strength of genuine feeling, I prefer "Holy Sonnet 10". I love the undeviating approach the sonnet offers, talking directly to Death as if it is merely a person. It is the sonnet that allowed my mind to wander the furthest, and it has opened my mind extensively to a new way of perceiving dying. If I had ever considered Death to be worth fearing, this sonnet has cured me, and proved to me that Death is nothing but a short sleep, before waking eternally. And when I do die, many of my friends and family will be in heaven waiting for me, as will I to the people I leave behind. It shows dying to be something other than the end, but more of a bridge that we all have to cross before we live eternally in peace. Death cannot kill me, and I see that now. Death is not a sad time, and we will all end up together anyway, in the end. John Donne, with his passionate feeling, has forced me to open my eyes, like some will never do, and see the bigger picture. We are all pawns in a game, and God is our master. Death has no real significance at all; it just thinks that it does. It is no real power, and deserves no real fear or respect. We will all, in time, overcome Death, and walk over that bridge into eternal bliss. Although "Spring" was itself, very meaningful, and touching, it does not portray just as much feeling as "Holy Sonnet 10", nor is it as easy to relate to wholly. The strength of feeling in both sonnets, overall, was exceptional. Francesca Selway 1 ...read more.