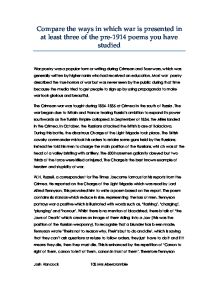 Compare the ways in which war is presented in at least three of the pre-1914 poems you have studied War poetry was a popular form or writing during Crimean and Boer wars, which was generally written by higher ranks who had received an education. Most war poetry described the true horrors of war but was never seen by the public during that time because the media tried to get people to sign up by using propaganda to make war look glorious and beautiful. The Crimean war was fought during 1854-1856 at Crimea in the south of Russia. The war began due to Britain and France fearing Russia's ambition to expand its power southwards as the Turkish Empire collapsed. In September of 1854, the Allies landed in the Crimea. In October, the Russians attacked the British base at Balaclava. During this battle, the disastrous Charge of the Light Brigade took place. The British cavalry commander mistook his orders to retake some guns held by the Russians. ...read more.

Despite many soldiers being killed, depicted in the final stanza of the poem, the war is portrayed positively and as glorious unlike the later poems that were written in the Boer War, like Thomas Hardy's, Drummer Hodge. War poetry was also popular in the Boer War which took place during 1899-1902. This was fought between the Britain and Dutch Boer settlers in South Africa (Orange Free State). The British wanted control of the diamond and gold deposits. The British Empire claimed victory in 1900, however the Boers continued to fight using guerilla tactics. Due to this the British adapted a 'scorched earth policy'. There were a lot of young boys who signed up to go to South Africa as a Drummer Boy. Thomas Hardy wrote a poem about this called 'Drummer Hodge'. It is about a Drummer Boy who goes to South Africa from the north of England who was killed and how he is not respected in death. ...read more.

Their courage and endurance was the inspiration for the poem called by Kipling, Dirge of the Dead Sisters. The poem is showing that the women could help on the Front Line, not fighting but helping. There is a contrast in the way that the Sisters were buried; 'they were lowered down' whereas Drummer Hodge was 'thrown' in. Comparing the poem to A Wife in London, Dirge of the Dead Sisters focuses on the Front Line whereas A Wife in London focuses on the Home Front, therefore we get a picture that the sisters played an active role in the war. As you can see, war was generally presented negatively but can also be presented positively depending on the situation or the person writing the poem. It can also tell people the truth about war and not just what they would have read in the newspapers. The truth however is generally depicted in the poems written by those who have experienced war firsthand, where's the glorious images generate came from those who are bystanders. ?? ?? ?? ?? Josh Hancock 10S Mrs Abercrombie ...read more.