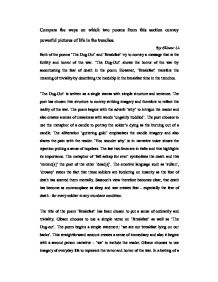 Compare the ways on which two poems from this section convey powerful pictures of life in the trenches - 'The Dug-Out' and 'Breakfast'.

Compare the ways on which two poems from this section convey powerful pictures of life in the trenches. By Oliver Li Both of the poems 'The Dug-Out' and 'Breakfast' try to convey a message that is the futility and horror of the war. 'The Dug-Out' shows the horror of the war by accentuating the fear of death in the poem. However, 'Breakfast' transfers the meaning of triviality by describing the hardship in the breakfast time in the trenches. 'The Dug-Out' is written as a single stanza with simple structure and sentence. The poet has chosen this structure to convey striking imagery and therefore to reflect the reality of the war. The poem begins with the adverb 'why' to intrigue the reader and also creates a sense of uneasiness with words 'ungainly huddled'. ...read more.

The emotive language such as 'sullen', 'drowsy' states the fact that these soldiers are bordering on insanity as the fear of death has scarred them mentally. Sassoon's view therefore becomes clear, that death has become as commonplace as sleep and war creates fear - especially the fear of death - for every soldier in any mundane condition. The title of the poem 'Breakfast' has been chosen to put a sense of ordinarily and triviality. Gibson chooses to use a simple verse on 'Breakfast' as well as 'The Dug-out'. The poem begins a simple statement: 'we ate our breakfast lying on our backs'. This straightforward account creates a sense of immediacy and also it begins with a second person narrative - 'we' to include the reader. ...read more.

Unlike 'The Dug-Out', there is no melancholy or emotive language in the poem whereas Giblson frequently use the simple word and slang to create a matter-of-fact tone and this generates a more horrific feeling upon the reader. Both poems portray the horror and fear of the war and make their point that war is futile by conveying powerful imagery in trenches. Both of them use the simple stanza and structure to express the feeling of fear and the sense of immediacy in trenches. 'The Dug-Out' is set in a mood of melancholy by using the pathos language such as the 'guttering gold' candle and describing the dankness that is surrounded with. Nevertheless, 'Breakfast' achieves the same level of horror only by simple language as Gibson cleverly connects the war to the eating of breakfast and therefore emphasizes his idea of triviality and fultility. ...read more.