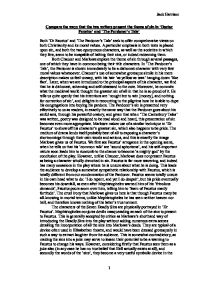 'Compare the ways that Marlowe and Chaucer present the theme of sin in 'Dr Faustus' and 'The Pardoner's Tale'.'

Compare the ways that the two writers present the theme of sin in 'Doctor Faustus' and 'The Pardoner's Tale' Both 'Dr Faustus' and 'The Pardoner's Tale' seek to offer comprehensive views on both Christianity and its moral values. A particular emphasis in both texts is placed upon sin, and both the two eponymous characters, as well as the societies in which they live, seem to be incapable of halting their sins, or indeed redeeming them. Both Chaucer and Marlowe explore the theme of sin through several passages, one of which they have in common being their title characters. In 'The Pardoner's Tale', the Pardoner is shown immediately to be a dishonest character with very few moral values whatsoever. Chaucer's use of somewhat grotesque simile in his mere description makes us feel uneasy, with his hair 'as yellow as wax' hanging down 'like flax'. Later, when we are introduced to the principal aspects of his character, we find that he is dishonest, scheming and self-obsessed to the core. Moreover, he commits what the medieval world thought the greatest sin of all in that he is so proud of it. He tells us quite openly that his intentions are 'nought but to win [money], and nothing for correction of sin', and delights in recounting to the pilgrims how he is able to dupe his congregations into buying his pardons. ...read more.

The Pardoner, on the other hand, is far from oblivious of his sin, but sin itself is portrayed in a rather different way by Chaucer. Rather than have the sins parade to him, the Pardoner details personally what he considers to be the worldly sins to the pilgrims. This creates the additional irony when the audience discovers that the Pardoner himself is guilty of all of them. Were 'The Pardoner's Tale' simply a sermon, an audience would perhaps not take it seriously, given that the Pardoner's hypocrisy makes his words lack any true conviction or seriousness. However, the part-Parabolic nature of the tale itself brings a new element of meaning into the sins of 'The Pardoner's Tale'. The characters in the tale are described simply as 'three rioters', and the tale is clearly one of morality: The Pardoner does not focus on their deaths at the end of the tale, simply skating over the fact that 'they had him slain, and that anon', not getting drawn into the violent details but keeping the overall message of morality going. We know the Pardoner is only doing this in an attempt to make the pilgrims 'meekly receive' his pardon and bag him a profit, but nonetheless the tale can be taken a lot more seriously than the Pardoner's sermon given its uncanny resemblance to one of Jesus' Parables. ...read more.

In most of the play, good and evil are kept very distinct, with Faustus' 'Good Angel' and 'Bad Angel' consciences. However here, they become merged, and therefore it becomes more difficult to measure Faustus' sins. In 'The Pardoner's Tale', we do not suffer this problem. The Pardoner's hypocrisy actually clarifies good and evil all the more because he is so outrageous that we can spot the irony that the 'good' path of life he forwards is not the one he takes. Chaucer also attempts a satire at the Church system, because the Pope and cardinals are in on the Pardoner's game. The Pardoner has 'come from the Court of Rome' and he later tells us that he has been given pardons 'by the Pope's hand'. This gives us the impression that the Church, as well as the Pardoner, is using people's fear of their own sins and retribution to make money. Human sin is a key strand of thought throughout both texts, and both authors present it in ways that invoke entirely different emotional responses from their audiences: Marlowe's invitation of empathy and sorrow is entirely contrasted by Chaucer's effect of comedy and farce. However, both in their own ways still leave a message of morality, and their different presentations of sin both contribute heavily to the audience's need for self-reflection after seeing or hearing the text. Jack Harrison 1 ...read more.