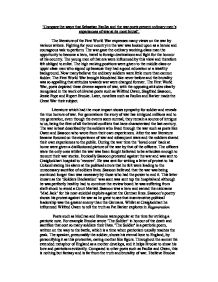 'Compare the ways that Sebastian Faulks and the war poets present ordinary men's experiences of war at its most brutal'. The literature of the First World War expresses many views on the war by various writers. Fighting for your country in the war was looked upon as a heroic and courageous task to perform. The war gave the ordinary working-class man the opportunity to become a hero, travel to foreign destinations and fight for the honour of his country. The young men of that era were influenced by this view and therefore felt obliged to enlist. The high ranking positions were given to the middle class or upper class men who signed up because they had a good education or a wealthy background. Now many believe the ordinary soldiers were little more than cannon fodder. The First World War brought bloodshed like never before and the brutality was so appalling that attitudes towards war were changed forever. The First World War, poets depicted these diverse aspects of war, with the opposing attitudes clearly recognised in the work of diverse poets such as Wilfred Owen, Siegfried Sassoon, Jessie Pope and Rupert Brooke. Later, novelists such as Faulks and Barker made the Great War their subject. Literature which had the most impact shows sympathy for soldier and reveals the true horrors of war. For generations the story of war has intrigued millions and to my generation, even though the events seem surreal, they remain a source of intrigue to us, being the first of all the brutal conflicts that have characterised the last century. The war is best described by the soldiers who lived through the war such as poets like Owen and Sassoon who wrote from their own experiences. After the war literature became focused on the experience of war and subsequent wars and the soldiers shared their own experiences to the public. During the war time the 'loved ones' back at home were given a disillusioned picture of the war by that of the officers. ...read more.

Faulks shows this in Birdsong when a wounded boy enters a ward with a name tag' Round his neck was a ticket'. Here an injured soldier is being compared to an animal with no identity apart from a brown paper ticket. After battle Stephen describes the men as just 'humps of khaki'. This was what a young boys life was reduced to, nothing but a number amongst the many thousands of other soldiers. Various poets have wrote about this such as Thomas Hardy who wrote Drummer Hodge, a poem about a young boy who had gone to war ; been killed and was then just thrown in a foreign grave. 'They threw Drummer Hodge, to rest unconfined- just as found'. Thomas Hardy wrote this after reading an article in the newspaper about this boy and wrote this poem with the intent to show the message of brutality and lost identity. In Birdsong Stephen writes a letter to Isabelle expressing his deep concern for the waste of lives of ordinary men: 'These men are boys are grocers and clerks, gardeners and fathers- fathers of small children. A country cannot bear to lose them'. Many writers describe how the war was dehumanising. The writers show how quickly and easily mankind could be reduced to a state lower than animals. Pat Barker, in her novel Regeneration, reflects on the War's terrible reversal of expectations: Barker describes many terrible situations soldiers face during the war such as how she describes a young soldier who couldn't eat because every time he did he would vomit uncontrollably. Later on in the novel we discover that the boy in question, whilst at battle he fell head first into the stomach of rotting soldier and when he tried to scream he swallowed the contents. Even though this is a fictional character stories such as these are of true experiences from soldiers and just show how horrifying war was. ...read more.

This shows how the men will of being in so much horror and physically exhausted that they comfort each other even thought they are enemies. The suffering involved for the soldier is unimaginable as in Birdsong Stephen didn't speak for years after the war because what he had witnessed change and wounded him for life. Stephen's only salvation is in the love of Isabelle's sister. The poems and other literature I have read show different approaches towards war and issues arising from it. Some of the writers present their work as a chance to show how proud the soldiers were to sacrifice themselves. This is particularly clear in Pope's 'Who's for the game', Brooke's 'Soldier' and Binyon's 'For the Fallen'. All of these writers use rich, patriotic language and minimised the suffering of those who died in battle. Where as other writers wrote refusing to subscribe to the patriotic clap-trap of the early phase and tell a much truer story of the war. Rosenburg, Sassoon and Owen particularly describe the brutality of war. These experiences of war described in the poems wrote by these writers show how many soldiers were left suffering both physically and mentally for years after the war had ended. It is the men who actually experienced war such as Wilfred Owen and Robert Graves who tell the story most truthfully. It is these men that had the courage to write the truth about the brutality of war instead of glorifying like Rupert Brooke and Jessie Pope. All of the war literature I have studied shows the writers own interpretations and experiences of World War One and each one in different ways shows how the war was just a terrible time to have lived through. The poems I have read and the novel Birdsong conjure up images which are reconigsable to those who have never experienced war giving them lasting significance. Word Count: 2925 ?? ?? ?? ?? ...read more.