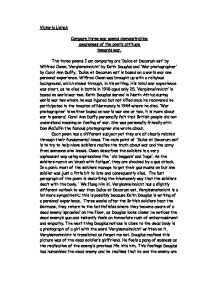 Victoria Lishak Compare three war poems demonstrating awareness of the poet's attitude towards war. The three poems I am comparing are 'Dulce et Decorum est' by Wilfred Owen, 'Vergismeinnicht' by Keith Douglas and 'War photographer' by Carol Ann Duffy. 'Dulce et Decorum est' is based on a world war one personal experience. Wilfred Owen was brought up with a religious background, which shows through, in his writing. His total war experience was short, as he died in battle in 1918 aged only 25. 'Vergismeinnicht' is based on world war two. Keith Douglas served in North Africa during world war two where he was injured but not killed once he recovered he participated in the invasion of Normandy in 1944 where he died. 'War photographer' is neither based on world war one or two, it is more about war in general. Carol Ann Duffy personally felt that British people did not understand meaning or feeling of war. She was personally friendly with Don McCullin the famous photographer she wrote about. Each poem has a different subject yet they are all clearly related through their fundamental ideas. The main point of 'Dulce et Decorum est' is to try to help nieve soldiers realise the truth about war and the army from someone who knows. Owen describes the soldiers in a very unpleasant way using expressions like ' old beggars' and 'hags'. ...read more.

The third verse continues telling the reader about the haunting visual images he suffers with, and the fourth verse is an insight into how people perceive his work. The caesura is used to show how the photographer is feeling. 'Belfast. Beirut. Phnom Penh.' This is a list of war zones. Carol Ann Duffy uses this technique to show the significance each place has. She does not need to go into detail just the name of the place where these horrific incidences happened is enough. Dulce et Decorum est also has three verses but slightly different as the first two verses have eight lines each and the last verse has twelve. The first verse of 'Dulce et Decorum est' describes the state of the soldiers walking back from battle ' knocked-kneed, coughing like hags, we cursed through sludge,' Owen sets the scene, as one of lost hope and exhaustion 'Men marched asleep'. The second verse is where the gas attack takes place. The unsuspecting soldiers are caught off-guard and are immediately overrun with panic 'an ecstasy of fumbling,'. The final verse continues in the usual pattern for the first eight lines, describing what happened the body of the soldier who did not put his gas mask on in time. The last four lines are Owen addressing the readers and summing up his point. 'My friend you would not tell with such high zest to children ardent for some desperate glory, the old lie Dulce et Decorum est Pro patria mori'. ...read more.

This powerful image brings out sentiment in the poem. Douglas uses imagery in a slightly different way to the other poets. 'Vergissmeinnicht' is similar to 'Dulce et Decorum est' in its harsh perception of war. 'Nightmare ground' is used to create the image of the battlefield where many lives were lost; this enforces fear into the mind of the reader. However, it is also similar to 'War Photographer' in its sense of understanding, distress and respect to those lost to war. 'Who had one body and one heart'. More than once Douglas personifies the gun strapped to the dead enemy. He uses this technique to show the soldiers death from another point of view. On both counts where gun is personified it is mocking the dead enemy. 'Mocked by his own equipment that's hard and good when he' decayed.' In 'War Photographer ' the second and third line rhyme as do the fifth and sixth. The reference to sound varies depending on where the photographer is, either in his dark room or on the battlefield. When the photographer is alone in his dark rooms the only sounds he hears are calm sounds of solutions as the 'slop' in the tray. However, when out on the battlefield the sounds he hears are a lot harsher 'explode' and 'cries' are just two examples of that. 'Vergissmeinnicht' has no apparent rhyming pattern at all unlike 'Dulce et Decorum est' which has rhyming couplets from the first two verses but no distinct pattern in the last verse. ...read more.