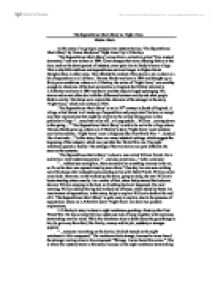 The Superstitious Man's Story vs. Night-Fears Mirdza Abele In this essay, I'm going to compare two mystery stories; 'The Superstitious Man's Story' by Tomas Hardy and 'Night-Fears' by L.P.Hartley. 'The Superstitious Man's Story' comes from a collection called "Few crusted characters," and was written in 1894. Great changes that were affecting Britain at the time, such as the development of industry, came quite late to Hardy's home village. This is why folk traditions and superstitions survived longer in Higher Brock Hampton than in other areas. This affected the content of his stories a lot, as there is a bit of superstition in all of them. Thomas Hardy was born in 1840 and brought up in fairly poor conditions, where as L.P.Hartley, the writer of 'Night-Fears,' was wealthy enough to attend one of the best universities in England-the Oxford University. L.P.Hartley was born in 1895 and had a wealthy and privileged upbringing. His stories and novels often deal with the difference between reality and what people think is reality. This helps us to explain the character of the stranger in the story 'Night-Fears,' which was written in 1924. 'The Superstitious Man's Story' is set in 19th century in South of England. A village called Dorset is all made up of superstition and people don't believe or accept any other explanations that might be relative to the events taking place in that particular village: "...mead two miles off...at Long puddle...William...coming down to the spring..." 'The Superstitious Man's Story' is said to be set in the village where Thomas Hardy grew up, where as L.P.Hartley's story-'Night-Fears' is set nowhere near his hometown. ...read more.

This story is written in the third person, which is the way that makes the story sound real: "Nancy did not answer yes or no...three days later William Privett was moving with John Chiles in Mr Hardcome's meadow..." Obviously the teller wants the listeners to believe and live through it and therefore, all the story is written in this particular person. As the story is told, it is easier to add exciting bits to it and make listener amused: "To he great surprise, and I might say alarm, on reaching the foot of the stairs his boots were standing there as they always stood when he had gone to rest..." It is hard to write in third person, but more people can be involved in the story and as the story is told, the listener can imagine it, like watching TV: "...William not being a man giving too much speaking, and his wife being occupied with her work." As you can see here, we get to know better about each character, when writing in this particular person. The 'Night-Fears" is also written in third person for the same reasons. The writer can easily describe, at the same time, the atmosphere and character: "...they bristled like a barricade. The night watchman felt himself in charge of a fortress." Perhaps, if the story was written in the first person, like the viewpoint of the watchman only, we would never see the two possible explanations. We would only see one and as people never realise that they are talking to themselves, then the stranger most probably would be seen as real. ...read more.

He needs to be admired by someone, in this case, his wife: "...he would tell her with the air of one who had seen much...he was very found of his wife..." In the end, I think it is his lack of confidence that kills him, the weakness of his spirit. The language used in both stories complicates things a bit. Especially in 'Night-Fears'. Some old expressions and words are used in both stories: "domain, ee, cuckoo, when the eye don't see..." I think that the use of these words and the old and more difficult structure of sentence, makes these stories seem more mysterious. Some of these words, such as: "drab-coloured" expresses and imposes much more imaginary and descriptive image, than just simply saying: "dull brown." The use of the words "drab-coloured" suggests a wet and cold image, where as the words "dull brown" doesn't impose anything else except the image of the colour itself. As a conclusion, I find 'Night-Fears' more mysterious and easy to believe. This might be because I don't believe in much superstition and 'The Superstitious Man's Story' is all about superstition and people who believe in it. 'Night-Fears' seems more realistic, because even in our days, there are people who die committing suicide, just as a cause of what they believe in. If people are easy to brake (spiritually) these days, then seventy years ago it would have had been even easier. The mystery in the story about the night watchman, crosses with reality, at some point. It is perfectly possible, that the night watchman committed suicide for his own reasons, where as William in 'The Superstitious Man's Story" just died because of a superstition people believed in. ...read more.