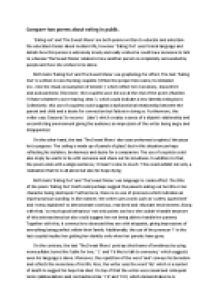 Compare two poems about eating in public. Eating out and The Sweet Menu

﻿Compare two poems about eating in public. ?Eating out? and ?The Sweet Menu? are both poems written to educate and entertain the educated classes about modern life; however ?Eating Out? uses formal language and details how this person is extremely lonely and really wishes he could have someone to talk to whereas ?The Sweet Menu? relates to how another person is completely surrounded by people and how she wishes to be alone. Both texts ?Eating Out? and The Sweet Menu? use graphology for effect. The text ?Eating Out? is written in non-rhyming couplets (?When the proper time came, he initiated me...Into the ritual consumption of lobster.?) which reflect her monotony, discomfort and awkwardness. ...read more.

The use of couplets could also imply he wants to be with someone and share out his loneliness. In addition to that, the poem ends with a single sentence, ?it hasn?t come to much.? This could exhibit not only a realisation that he is all alone but also his hope dying. Both texts ?Eating Out? and ?The Sweet Menu? use language to create effect. The title of the poem ?Eating Out? itself could perhaps suggest the parents eating out her life or her character being destroyed. Furthermore, there is no use of pronouns which indicates an impersonal surrounding. In like manner, the writer uses words such as ?cutlery supervised? and ?menu explained? to demonstrate a serious, restricted and reluctant environment. ...read more.

On top of that the writer uses casual and colloquial terms (abbreviations and contractions like ? I?d? and ?I?m?) which demonstrates he is desperate to have someone to talk to and share his thoughts and feelings with. Additionally, the lexical field of ballet is adopted by the use of words like ?pirouettes? and ?plies? to suggest this is all staged and relationships are fake and only based on money. Finally he refuses to have ?the sweet menu? (?No thanks?) suggesting his life is incomplete just the way his meal is. Ultimately, both texts have titles that make them sound joyful and exciting but actually aren?t. Yet, the text ?The Sweet Menu? has a lack of pronouns to present loneliness while the text ? Eating Out? uses a lot of pronouns to show eager for loneliness. ...read more.