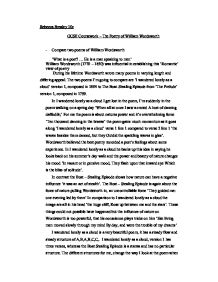 Rebecca Brealey 10c GCSE Coursework - The Poetry of William Wordsworth - Compare two poems of William Wordsworth 'What is a poet? ... He is a man speaking to men' William Wordsworth (1770 - 1850) was influential in establishing this 'Romantic' view of poetry During his lifetime Wordsworth wrote many poems in varying length and differing appeal. The two poems I'm going to compare are 'I wandered lonely as a cloud' version 1, composed in 1804 to The Boat-Stealing Episode from 'The Prelude' version 1, composed in 1799. In I wandered lonely as a cloud I get lost in the poem, I'm suddenly in the poem walking on a spring day 'When all at once I saw a crowd A host of dancing daffodils;' For me the poem is about natures power and it's overwhelming force 'Ten thousand dancing in the breeze' the poem gains much momentum as it goes along 'I wandered lonely as a cloud' verse 1 line 1 compared to verse 2 line 1 'the waves besides them danced, but they Outdid the sparkling waves in glee'. ...read more.

When reading the poems, the different structures change the way I read them. I wandered lonely as a cloud is a lighthearted poem I didn't put much effort into reading it. Whereas when reading Boat Stealing Episode I concentrated hard to get the feel of the poem. Wordsworth uses personification to give the poems I'm comparing a more realistic approach. He does this by changing the scenery/objects around him similar to what people say and/or do 'Ten thousand dancing in the breeze' and in the Boat - Stealing Episode ' a huge cliff As if with voluntary power instinct Upreared its head' I wandered lonely as a cloud is a poem about truth and beauty whereas the Boat Stealing Episode is more about the electrical force of nature guiding Wordsworth to the lake causing him to steal the boat. In I wandered lonely s a cloud Wordsworth uses personification to give his work life 'Ten thousand dancing in the breeze' he uses old fashioned words like 'shew' and 'oft' to make the poem seem like a walk in the country! ...read more.