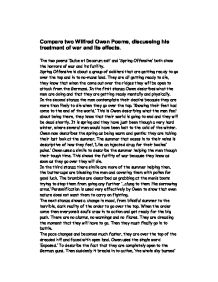 Compare two Wilfred Owen Poems, discussing his treatment of war and its effects.

Compare two Wilfred Owen Poems, discussing his treatment of war and its effects. The two poems 'Dulce et Decorum est' and 'Spring Offensive' both show the horrors of war and its futility. Spring Offensive is about a group of soldiers that are getting ready to go over the top and in to no-mans land. They are all getting ready to die, they know that when the come out over the ridges they will be open to attack from the Germans. In the first stanza Owen describes what the men are doing and that they are getting ready mentally and physically. In the second stanza the men contemplate their deaths because they are more than likely to die when they go over the top. 'Knowing their feet had come to the end of the world.' This is Owen describing what the men feel about being there, they know that their world is going to end and they will be dead shortly. ...read more.

To describe the fact that they are completely open to the German guns. Then suddenly it breaks in to action, 'the whole sky burned' the sky burned with the fire of the guns, and many people died, their blood is described as being collected in the shell holes then they die. 'Chasmed and deepened in to infinite space' they fall in to hell. Those that were left alive were brave and tried to shield themselves from the bullets but got hit. 'On the host blast and fury of hell's upsurge' these are the shells that explode beneath them and literally blow then upwards. This shows the horror that the men must have experienced when they were fighting in the trenches and the Somme. When the soldiers die they get dragged down in to down in to hell or some might be caught before they fell and helped in to heaven. This last stanza shows a big comparison between war and hell. ...read more.

Owen recalls this happening again and again in dreams that he has about the event. They put him in a wagon while he was still alive and brought him back. He eyes were writhing in pain because he was dieing and suffocating. 'Obscene as cancer, bitter as the cud' he is graphically and effectively describing what is happening to the young boy and what he is feeling watching him die. Jessie Pope is referred to in this poem as 'You' He refers to Jessie Pope when he says 'My friend, you would not tell with such high zest To children ardent for some desperate glory, The old lie: Dulce et decorum est Pro patria mori.' The 'you' is Jessie Pope; he shows great dislike towards her and what she tells young men to do. Both these poems show the futility and horror of war, one in an attack at the front line the other far from the front line but still just a terrifying. Metaphors, similes and personification are used to great effect in this poem, they help to show what he and the other men were feeling at the time, and how he feels about war. ...read more.