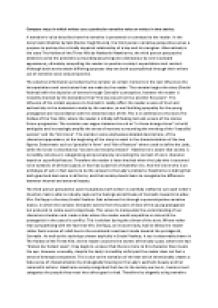 Compare ways in which Saki and Hawthorne use a particular narrative voice in &quot;Sredni Vashtar&quot; and &quot;The Hollow of Three Hills&quot;.

﻿Compare ways in which writers use a particular narrative voice or voices in two stories. A narrative?s voice describes how the narrative is presented or conveyed to the reader. In the story Sredni Vashtar by Saki (Hector Hugh Munro), the third person narrative perspective serves a purpose to portray the critically impaired relationship of a boy and his caregiver. Alternatively in the story The Hollow of the Three Hills by Nathaniel Hawthorne, the third person perspective attends to arise the problems surrounding assuming ones demeanour by one's outward appearance; ultimately compelling the reader to question society?s expectations and conduct. Although both stories attain differing purposes they are both accomplished through their writers use of narrative voice and perspective. The selective information provided by the narrator at certain moments in the text influences the interpretations and conclusions that are made by the reader. The narrator begins the story (Sredni Vashtar) with the depiction of events through Conradin?s perception, however the reader is instantly shocked by the declaration that ?the boy would not live another five years?. ...read more.

The third person perspective used mutually by both writers is carefully crafted to suit each writer?s intention. Saki is able to robustly capture the feelings and attitudes of Conradin towards his elder, Mrs. De Ropp in the story Sredni Vashtar. Saki achieves this through a quasi-objective narrative stance, in which the narrator interprets events from the point of view of the young protagonist but pretends to relate events objectively. This serves to manipulate the understanding of our characters situation and create a bias where the reader would empathise or side with the protagonist in the case of a conflict. This is evident during the climax of the story. Where rather than sympathising with the fact that Mrs. De Ropp, an innocent lady, had be killed; the reader rather feels a sense of relief due to the emotional investment made towards the protagonist, Conradin. As well as this technique shown explicitly in Sredni Vashtar, it too is observably shown in The Hollow of the Three Hills. ...read more.

As well a sense of internal regret due to inaccurately judging the content of both the Lady and the Crone?s character. Through this Hawthorne is about to allegorically target societies fault in erroneously concluding whether someone is considered, good or bad. The different approaches by the narrators in the two stories each serves a vital role in presenting the authors intended themes. These themes are displayed through a variety of different methods using narrative voice and perspective. In the story Sredni Vashtar, Saki carefully crafts the piece to reveal how through narrative voice the reader is able to empathise with characters who primarily share no similar experiences at all, yet vicariously indulge in the victories of those same characters. Similarly in The hollow of the three hills, the reader feels a sense of regret due to the discovery of the lady?s sinful past, despite not sharing any similar experiences themselves. The influence of narrative voice is one that affects the total outcome of a writing piece, and therefore is a tool that can drastically stimulate the mind of the reader. 1025 Words ...read more.