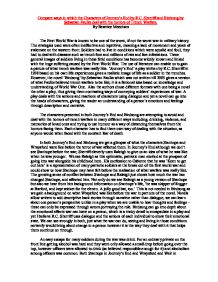 Compare ways in which the Characters of Journeys End by R.C. Sherriff and Birdsong by Sebastian Faulks deal with the horrors of Trench Warfare.

Compare ways in which the Characters of Journey's End by R.C. Sherriff and Birdsong by Sebastian Faulks deal with the horrors of Trench Warfare. By Beatrice Meecham The First World War is known to be one of the worst, if not the worst war in military history. The strategies used were often ineffective and repetitive, meaning a lack of movement and years of stalemate on the western front. Soldiers had to live in conditions which were squalid and foul, they had to deal with diseases such as trench foot and millions of rats and lice infestations. These general images of soldiers living in these fetid conditions has become widely known and linked with the huge suffering caused by the First World War. The use of literature can enable us to gain a picture of what trench warfare was really like. 'Journey's End' a play written by R.C. Sherriff in 1928 based on his own life experiences gives a realistic image of life as a soldier in the trenches. However, the novel 'Birdsong' by Sebastian Faulks which was not written till 2005 gives a version of what Faulks believed trench warfare to be like; it is a fictional idea based on knowledge and understanding of World War One. Also the authors chose different formats with one being a novel the other a play, thus giving them contrasting ways of conveying soldiers' experiences of war. ...read more.

In Journey's End Stanhope is worried about what Raleigh would write home in his letter, I believe that maybe another matter that Stanhope uses to redirect his thoughts away from memories, it gives him something else to think about. Which again leads to more violence 'D'you understand an order? Give me that letter!' Despite these small areas of conflict there is a strong theme in both Journey's End and Birdsong, of comradeship. Men on the front line were often forced into forming new relationships with people and often because of this gained extraordinarily strong bonds with men they were fighting alongside with. This is shown by the example of Stanhope and Osborne, and shown to the audience in many scenes but mostly through the touching goodbye scene before the fatal raid and right at the end Stanhope and Raleigh final bond over his death, 'Stanhope sits with one hand on Raleigh's arm' they had fought together in the same battles and known what the other men had seen, they understood. In Birdsong the strong relationship between Wraysford and Weir grew throughout the novel and like many soldiers on the frontline Wraysford needed Weir for company and to help his sanity, 'Weir alone had made the war bearable' friendships like Weir's and Wraysford's meant that soldiers could get through the war together. ...read more.

Each soldier on the front line had to choose their own way of escaping and dealing with the horrors of trench warfare. The putrid living conditions and the everyday horror of death meant that it was necessary for them to break out of the truth they were living. Many of the methods used in both Journey's End and Birdsong are similar but their methods were carried out in different ways. Others didn't use methods at all, they just didn't cope; like Hibbert in Journey's End faking an illness to get away. Each character in either Journey's End or Birdsong took on different methods of dealing with their long hardships and suffering. The true horrors of the war however could not be forgotten, the sight of death and the stench in the trenches would not be quickly removed from their thoughts. These literary texts both play and book give us, today, just a brief insight into the lives of men on the western front, the challenges faced by these men were truly horrific and just surviving must have been a hardship. No one now or then on the home front could ever know the true extent of the struggle and the effects it had both mentally and physically, 'If they could see the way these men live they would not believe their eyes. This is not a war; this is an exploration of how far men can be degraded.' ...read more.