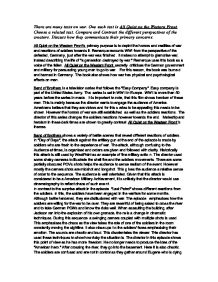 Comparing &quot;All Quiet on the Western Front&quot; and &quot;Band of Brothers&quot;. Compare and Contrast the different perspectives of the creators. Discuss how they communicate their primary concerns.

There are many texts on war. One such text is All Quiet on the Western Front. Choose a related text. Compare and Contrast the different perspectives of the creators. Discuss how they communicate their primary concerns. All Quiet on the Western Front's primary purpose is to depict the horrors and realities of war and reactions of soldiers towards it. Remarque recounts WWI from the perspective of the defeated, Germany, just after the war was finished. It makes no attempt to glamorise war, instead describing the life of "a generation destroyed by war." Remarque uses this book as a voice of the fallen. All Quiet on the Western Front secretly criticises the German government and military for persuading young men to go to war. For this reason, the book was burned and banned in Germany. ...read more.

In "Day of Days", the attack against the artillery gun at the end of the episode is made by soldiers who are fresh to the experience of war. The attack, although confusing to the Audience at times, is organised and orders are given and followed with clarity. Historically this attack is still used by WestPoint as an example of fine military action. The director used some shaky cameras to illustrate the shell fire and the soldiers movements. There are some partially obscured POVs shots helps the audience to sense realism of the event. However mostly the camera shots are midshot and longshot. This gives the audience a relative sense of order to the sequence. The audience is well orientated. Given that this attack is considered to be a American Military Achievement, it is unlikely that the director would use cinematography to reflect chaos of such event. ...read more.

The sounds are chaotic and loud. This disorientates the viewer. THe director has used these techniques to show how risky the situation is. The director in this episode shows this point of view as he has more freedom. He no longer needs to produce the idea of the "American hero." After crossing the river, they go into the basement. Here it is also chaotic. The soldiers are confused and are not in control as they gather around Eugene who is dying. After his death there is a stop in the gunfire, emphasising the shock. Eugene, the medic has a voice over giving a personal view on the death. "He enrolled young" makes the viewer feel sympathetic for the soldier. In All Quiet on the Western Front, there are many examples of the reactions of soldiers. In battle, soldiers act violently in order to survive. They "have turned into dangerous animals." This shows that they use instinct to kill without any real hesitations. They need to do this to survive. ...read more.