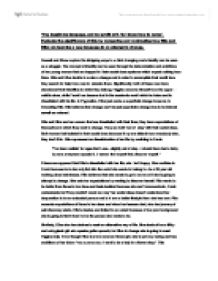 Comparing &quot;Educating Rita&quot; and &quot;Pygmalion&quot;You taught me language, and my profit ont / is I know how to curse.

'You taught me language, and my profit on't / is I know how to curse'. Evaluate the significance of this by comparing and contrasting how Rita and Eliza are learning a new language in an attempt to change. Russell and Shaw explore the intriguing ways in which changing one's identity can be seen as a struggle. The concept of identity can be seen through the determination and ambitions of two young women that are trapped in their social class systems which expect nothing from them. Rita and Eliza decide to make a change and in order to accomplish their ambitions they search for help from men to educate them. Significantly, both of these men have abandoned their identities to which they belong; Higgins removes himself from the upper-middle class, while Frank has become lost in the academic world which he hates and is dissatisfied with his life. In Pygmalion, Eliza just wants a superficial change however, in Educating Rita; Rita believes that change can't be just superficial; change has to be internal aswell as external. Rita and Eliza are two women that are dissatisfied with their lives; they have expectations of themselves in which they want to change. ...read more.

However, it could also portray a chance of hope that others have escaped, so she can aswell. Eliza's desires are symbolised by a poster "...a fashion plate of ladies' dresses, all wildly beyond poor ELIZA's means" Eliza's dreams are symbolises by these women of how she would dream of being like them. During Rita and Eliza's journey of their change, both characters feel isolated from their social class systems and the class they want to belong to. They both have a certain occasion where they both feel they cannot change from what they are and find it hard to be able to fit in with everybody else. Rita reveals her dissatisfaction after not turning up to Frank's party. "Because I'm a freak. I can't talk to the people I live with anymore. An' I can't talk to likes of them on Saturday, or them out there, because I can't learn the language. I'm an alien." Rita feels completely isolated from both worlds; she feels like a 'half-caste' not able to fit in either working class or middle class. This is a significant quote because it portrays an excellent way of Rita struggling, she can't get to grips with 'learning the language' she ...read more.

Overall, Rita and Eliza's change in identity is presented as a struggle. Rita's change is external and internal as she believed in herself to change everything about herself. Whereas, Eliza's change is external as the only change is what you can see, she changes her voice and appearance but internally she still has the mind of a flower girl. Both of these women's journey of change is difficult as they both come from poor backgrounds, they found it hard to fit in and then found it a struggle to get in the mind of an educated person. As the plays are written in different time periods both are portrayed the same because they have the same meaning which is about struggle of change. The main characters Rita and Eliza learn many lessons along their journey of change, for Eliza she learns alot of external changes such as hygiene, manners, etiquette, confidence and appearance, she also learns how to be independent. Rita's changes are more internal as she learns dependence, confidence and social skills. All of these changes are positive but they have both struggled to cope with what's expected of them. The struggles the characters encounter are because of their poor backgrounds as they both lack education. Overall, Russell and Shaw present the changing to one's identity as a struggle. ...read more.