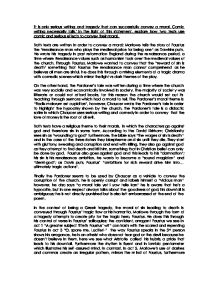 Comparing Faust and the Pardoner. 'It is only serious writing and tragedy that can successfully convey a moral. Comic writing necessarily fails.' In the light of this statement, explore how two texts use comic and serious effects to convey their moral.

'It is only serious writing and tragedy that can successfully convey a moral. Comic writing necessarily fails.' In the light of this statement, explore how two texts use comic and serious effects to convey their moral.

Both texts are written in order to convey a moral; Marlowe tells the story of Faustus the “renaissance man who plays the medieval price for being one” as Dawkins puts. He wrote his tragedy in post reformation England during the renaissance period, a time where Renaissance values such as humanism took over the medieval values of the church. Through Faustus, Marlowe wanted to convey that the “reward of sin is death” something that Faustus the renaissance man cannot comprehend as he believes all men are sinful, he does this through a mixing elements of a tragic drama with comedic scenes which mirror the light vs dark themes of the play.

Both texts have a religious theme to their morals, in which the characters go against god and therefore sin in some form. According to the David Kirkham; Christianity sees sin as “wounding to god” furthermore, the bible says “the wages of sin is death” and in the case of the three rioters they blaspheme and sin until they die. They start with gluttony, swearing and corruption and end with killing, they also go against god as they attempt to find death and kill him, something that in Christian belief can only be done by god.  Faustus also goes against god and this leads to his “damnation”; his sin is his renaissance ambition, he wants to become a “sound magician” and “demi-god”; as Davis puts, Faustus’ “ambitions for rich reward drive him into… ultimately tragic actions”.

Finally the Pardoner seems to be used by Chaucer as a vehicle to convey the corruption of the church, he is openly corrupt and labels himself a “vicious man” however, he also says “a moral tale yet I yow telle kan” he is aware that he’s a hypocrite, but in one respect always talks about the goodness of god, his downfall is ambiguous; he is not directly punished but is also left embarrassed at the end of the poem.

In the context of being a Greek tragedy, the moral of sin leading to death is conveyed through Faustus’ tragic flaw or his hamartia. Marlowe through the form of a tragedy attempts to create pity for the tragic hero, Faustus. He does this through his control of verse in Faustus’ soliloquies; the confident, arrogant Faustus we see in act 1 “A greater subject fitteth Faustus’ wit” contrasts with the scared and repenting Faustus in act 5 “O, spare me, Lucifer!-”  the way Faustus speaks in the 3rd person shows his arrogance, he is an atheist who does not fear god or the devil because he doesn’t believe in them, here we see what Aristotle called  his hubris, a pride that leads to his downfall. Furthermore the rhythm is fluent and in Iambic pentameter which illustrates his self-assured mind. In contrast, in act 5, Marlowe’s use of dashes and commas create an irregular pattern, mirrors the mind of Faustus, furthermore the repetition shown in “See, see where Christ’s blood streams” shows a spontaneous thought and feeling – “the confused mind of a frantic desperate man” as Roy Blatchford puts. Faustus finally fears god, but he is tragically too late.

The Pardoner uses the story of crucifixion in order to convey his moral.  Christians believed that Christ died for the sins of others, the Pardoner makes the point that by sinning the people are submitting Christ to re-crucifcation “Oure blissed Lordes body they totre” here he is very serious, the appalling physical and mental anguish created by the image of Christ adds depth to his point on sin. In addition, like Marlowe, Chaucer uses stylistic devices in order to convey his moral, and make it memorable; for example, the Pardoner uses exclamation and repetition “O cursed sinne of cursenesse!” to underline his point. It is interesting that the Pardoner is openly sinful “by thy myself be guilty in that sinne” yet still conveys the word of god; here he touches on a large theological debate of the time, can an evil man preach? One school of thought is that an evil person cannot know anything, because knowledge is love. However, others argue that the Pardoner does not sin, because his “relikes been they, as wenen they echoon” – The Pardoner’s relics are holy if people think they are, so if he is just trying to make a living, where is the sin? He brings people closer to god through his sermons, even if he is a hypocrite.

Marlowe interweaves comedic scenes within his tragedy in order to convey his moral. Taking inspiration from mystery plays by including a series of separate scenes which pass before the reader, the way Marlowe alternates between tragedy and comedy is a “deliberate structural strategy” as said by crossref-it.info. Marlowe contrasts scenes of serious discussion like A1 S1 “O, what a world of profit and delight” with the farcical exploits of Faustus for comedic effect, who tricks a Horse courser into buying a Horse which turns into a “bottle of hay” when it touches water.  The effect of this is to speed up time and therefore convey the inpending damnation of Faustus, furthermore the comedic scenes are used to show how Faustus’ aspirations deteriate as soon as he recieves the “heavenly” “necromantic books” from Mephosophilis. A Christian reading would indicate that only true power can come from god, and it is because of this Faustus commits more sin through avarice because he believes it will give him the happiness and salvation he craves.

On the otherhand, Chaucer uses comedy, mainly at the end of the poem, in order to show that the Pardoner has failed in his persuasion. The host is from the school of thought that an evil man cannot preech goodness, and is therefore outraged when the Pardoner asks for people to buy his relics, despite admitting they’re fake. Saying the Pardoner would have him “kisse thyn olde breech...swere it a relik of a seint” The Pardoner is left angry and embarassed at the thought of having his “collions” enshrined in “hogges toord”. This paints a vivid image, and therefore conveys the moral of the sermon, by showing how evil the Pardoner is, and how he has been corrupted by all the sins the church is supposedly against.

The way both authors change between comic and serious tones is not only crucial to the way their stories are told, but also to the way they convey their morals. Without the comedic scene at the end, the Pardoner is left unscathed for all his sin, which would prove a poetic injustice for the reader. The contrast between the comic and tragic is used by Marlowe to show how Faustus aspirations and increasing feelings of regret and despair form the play’s most compelling structure, by the end of the play he is sorry for his sins asking “where is mercy now?” but as seen in the comedic scenes, he wasted his time on earth further blaspheming, instead of repenting, and it because of this that Faustus will “die eternally” illustrating Marlowe’s moral.