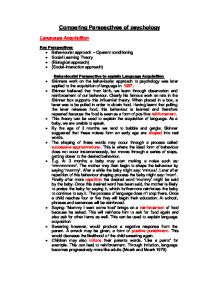 Comparing Perspectives of psychology Language Acquisition Key Perspectives * Behaviourist approach - Operant conditioning * Social Learning Theory * (Biological approach) * (Social-Interaction approach) Behaviourist Perspective to explain Language Acquisition * Skinners work on the behaviourist approach to psychology was later applied to the acquisition of language in 1957. * Skinner believed that from birth, we learn through observation and reinforcement of our behaviour. Clearly his famous work on rats in the Skinner box supports this influential theory. When placed in a box, a lever was to be pulled in order to obtain food. Having learnt that pulling the lever releases food, this behaviour is learned and therefore repeated because the food is seen as a form of positive reinforcement. * This theory can be used to explain the acquisition of language. As a baby, we are unable to speak. * By the age of 3 months we tend to babble and gargle. Skinner suggested that these noises form an early age are shaped into real words. * The shaping of these words may occur through a process called successive approximations. This is where the ideal form of behaviour does not occur instantaneously, but moves through a series of steps, getting closer to the desired behaviour. ...read more.

That is they will only bother to imitate a word or sentence, providing they know they will be able to repeat it. If someone tells a child a sentence that doesn't make sense or is grammatically incorrect, then they cannot repeat it because they know it is incorrect and therefore socially unacceptable to say, because they wont be understood. * People are more likely to copy models who are reinforced. - Vicarious reinforcement. For example if the child has an older sibling. The sibling might say something to his mother and receive praise for what he said. The younger brother may then repeat what his brother said in order to receive praise for him. Explaining the acquisition of language through the biological approach has been subject to much debate. It has been decided that language cannot develop without some form of environmental input. However, psychologists such as Chomsky (1957) believe that environmental inputs are not enough to explain the acquisition of language. He and fellow psychologists believed that children are born with a 'language acquisition device' (LAD), where children are already programmed to formulate and understand sentences even if they have never heard them before. He believed the process was more complex and less predictable than behaviourist psychologists such as Skinner believed. ...read more.

The evidence to support this theory was again, very unscientific, perhaps due to the focus on humans and it would be very unethical to study on humans in this period of time. Also even if this approach was scientific, it is very individualistic because every individual in this perspective is different to another. Therefore results would be very hard to generalise. The cognitive approach of the 1950's is very scientific. The behaviourist approach didn't take into account any cognitive processes, such as language, memory and perception for example. In terms of the cognitive approach and information processing approach, a stimulus is processed, stored and retrieved to provoke a response. Therefore one of these parts of the process can easily be manipulated to experimentally and scientifically see them effects on the rest of the process and indeed the whole mind. Computers are often also used in experiments, usually to compare computer systems with the human brain, which is a main assumption of this approach. It goes without saying that the biological approach is scientific in its experimentation. Especially with the new advances in medicine such as MRI and CAT scans, which can visually assess functions in the brain in a quantitative form. We can also biologically test and experiment the responses of people given a stimulus as in both the cognitive and also behaviourist approach, with classical conditioning where reflex responses are crucial to its theory. ...read more.