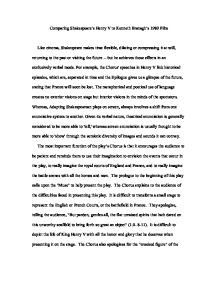 Comparing Shakespeare's Henry V to Kenneth Branagh's 1989 Film Like cinema, Shakespeare makes time flexible, dilating or compressing it at will, returning to the past or visiting the future -- but he achieves those effects in an exclusively verbal mode. For example, the Chorus' speeches in Henry V link historical episodes, which are, separated in time and the Epilogue gives us a glimpse of the future, stating that France will soon be lost. The metaphorical and poetical use of language creates no exterior visions on stage but interior visions in the minds of the spectators. Whereas, Adapting Shakespearean plays on screen, always involves a shift from one enunciative system to another. Given its verbal nature, theatrical enunciation is generally considered to be more able to 'tell,' whereas screen enunciation is usually thought to be more able to 'show' through the semiotic diversity of images and sounds it can convey. The most important function of the play's Chorus is that it encourages the audience to be patient and reminds them to use their imagination to envision the events that occur in the play, to really imagine the royal courts of England and France, and to really imagine the battle scenes with all the horses and men. ...read more.

Branagh added the scenes like the ones mentioned above, but he also cut a great many lines (including entire scenes such as the comedic "leek" scene in Act V). What Branagh does with the script is to rearrange some of the Chorus lines to introduce scene changes. These lines help to clarify the action for the audience. "Whether or not "replacement" is the right term here, the problem of doing justice to Shakespeare's verse within a primarily visual medium has plagued most directors of screened Shakespeare, and the various means by which this has been attempted offers an interesting historical through-line" (Freedman 432). In Act II the function of the Chorus is to fill in the lapse of time that has occurred since the time when King Henry made the decision to go to war against France. The audience is informed that the English have been preparing to go off to battle. All the young men of England are joining King Henry's forces. The French, on the other hand, have found out about the English plans, and "shake in fear." They are planning to "divert the English purposes." In order to do so, they employ three corrupt English men, Richard Earl of Cambridge, Henry Lord Scroop of Masham, and Sir Thomas Grey, knight of Northumberland, to help France to conspire against the king of England. ...read more.

Bardolph realizes too late that he has hung the thief himself, and that he has sealed his own fate by ignoring Henry's prophetic warning from years before. The prologue to act IV sets the scene up for the battle. The Chorus once again gives the audience some insight into the character of Henry V as well. The prologue to the last act fills in the lapse in time that occurred since the battle was won up to the point where Henry returns to France. The Epilogue closes the play with the Chorus reminding the audience that the event depicted is hard to present on stage due to lofty subject matter dealing with such a great man as King Henry V. "One of the wonders of Shakespeare's prose is that, spoken by actors who understand the meaning of the words, it is almost as comprehensible today as when it was first written. Branagh and his actors go for emotion or styles of delivery at the cost of clarity" (Ebert). It is this lack of clarity that cuts off the interior vision provided by the theatrical enunciation that is the intended vision of this play of Shakespeare's. Although brevity may be the soul of wit, no brief film can do justice to the dramatic text of a Shakespeare play. ...read more.